In part three of my interview with Dana Marlowe, founder of Support The Girls, we talk about the importance of bras and feminine hygiene products in the lives of transgender women, homeless women, and women in need on a global level.

I realize not all women have periods and not all people who have periods are women. One of the things I tell any organization that is interested in partnering with us is we do donate to transgender organizations. And that’s rubbed a couple of southern organizations the wrong way. That’s fine. Every time I post a photo on social media of us donating to a transgender organization, I can usually watch our numbers fall. Give it about a day or two and for however many we lose, we gain so many more. We’re not all likeminded. At the end of the day my mission is not to be some staunch liberal leading an organization, it’s about empowering women in your community to help other women in your community with these dignity items.

Do women in need reach out to you?

I mean it has been completely mind-blowingly amazing. My inbox fills up every day with stories of women who tell me I used to be homeless and living in Las Vegas and I never had maxi pads and tampons and I would have to steal or beg people in the casinos for them and how having an organization like Support the Girls makes a difference to so many people. I met many women who keep their breasts up with a belt.

I can totally see a belt working.

Yep, yes! Because if you don’t have a bra but you still want that support, you have to use belts. People do what they have to do to get by. Same goes for menstrual products. We’ve met many women who steal products. Teenagers get caught and they get a record on account of stealing tampons which then impacts them for the rest of their lives. I’ve met women who are using paper towels and duct tape and ripped t-shirts and insides of mattresses and all different materials to serve as hygiene products for their period. That’s not okay. This is just not okay. A lot of states have a tax on maxi pads or tampons. It’s called a tampon tax. It’s just not okay with me at all. I’m not saying this is the best solution out there—Support the Girls—but it is a solution. New York City fortunately passed a law last year that there’s gonna be free access to tampons in homeless shelters, public schools and correctional facilities but that’s not the norm, that’s new. We’re trying to push that legislation through other cities and states but like anything it takes time. We keep plugging away at it. (We keep) talking about how to break the taboos that recognize there’s a time and place for bras to be sexy and there’s also a practicality about them that bring dignity to people, that lets them stand up straighter, that lets their clothes lay appropriately and make them feel better about themselves. So I do walk around with bras and tampons when I give speeches and help to open the conversation and break that stigma which I think is silly anyway. 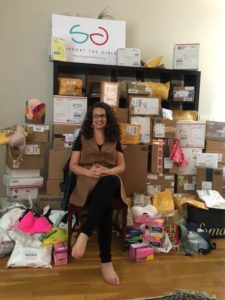 We’ve done a couple of events where we’ve given away bras at a shelter. I’ve had bra fitters and professionals come in because clearly I’m not. Everyone can pick five bras. I like to talk to the women and find out why they’re picking what they’re picking. There was this one woman who only wanted hot pink; she had breast cancer. She’s been homeless for years. She loves to wear pink, she’s known for her pink. She said, “I’m just so excited I can pick out a whole bunch of bras in my size that are hot pink.” Crystal always sticks out for me because Crystal used to be a painter and an artist. She’s been homeless for years. She’s had the same bra for 8 years! She was so excited to pick out a new bra. We talked about what her preference would be and it was for a sports bra. She said, “I don’t even want the new ones you brought. I want a used one.” And so I said, “Why do you want a sports bra?” And she said, “Well, one I don’t want the underwire to cut in and break. Two, a sports bra doubles as a purse.” I didn’t know why a sports bra would double as a purse. She said, “A sports bra has the extra fabric that lets me put my most precious items next to me. No one’s going to get to them. I’m in and out of a lot of high risk locations. Shelters are not the safest places and the sports bra can contain it.” The other bra she wanted to pick out was red and lacy. I was like, “Why a red lacy bra?” And she said, “I’m homeless. I don’t feel pretty. I look in the mirror and I’m never happy with who I am. Having a red lacy bra is something that doesn’t put me at risk  because nobody can see it. If I were to pick one of these fancy sweaters  or fancy scarves or something that could be desirable to other people—whether they would want to hurt me for it or they would want to steal from me—I don’t want to call attention to myself. But a red lacy bra? I know it’s there. It’s hidden under my clothes. It can make me happy and smile just from knowing that it’s there.” There’s that.

Speaking of women with breast cancer, what about women who have had mastectomies?

We’ve received donations of mastectomy bras from women who have had breast cancer. We work with different partners to distribute those to low income women with breast cancer or in need of those highly expensive products. We’ve received donations from literally every state. I appreciate that that people are willing to participate and help others because at the end of the day they’re helping people they don’t know. I mean there’s a little bit of irony in the fact that strange women are sending me their undergarments in the mail. When I put it that way, Marcelle, it’s a little creepy.

It’s so wonderful how you’ve galvanized legions of people and corporations as well.

I still can’t believe this is working. We just had Support the Girls Taiwan ship 8000 bras. Support the Girls Thailand donates to the United Nations High Commission on Refugees and Nightlight international that helps victims of sex trafficking. It’s still very very much a pinch me. It still makes me marvel that it’s working.