As I was putting all this interview together, I was lucky enough to gave a late lunch with Dana Marlowe, founder of Support The Girls. She was in New York for an event. And as we sat across from each other at a random table at Dean and Deluca, we ran through the litany of our days, as if we’d been best friends forever and it was the most natural thing to do. And you know what? It was the natural thing to do, for like-minded women. It’s just easy to talk to each other. And so in my final entry of this series, we get into the F-words—family and feminism. 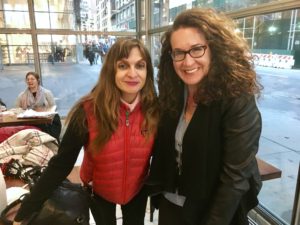 So you have two sons.

Ah you’re in the magical years. When kids want to hold your hand and call you “Mommy.”

Yeah. I’m married to a feminist and we’re raising two feminists. We have had many people in the house who have been so shocked at… first of all my house, at right now? To date, we have donated collectively 85,000 bras and nearly 400,00 menstrual products.

So you’re basically swimming in this stuff. Like you are in Legos.

Yeah and that’s really important to me, that my kids are raised with a focus on equality. I will never forget when there was a reporter in my house asked—I guess at the time he was 7—my older son, “Do you know what those things are?” He looks at the reporter as if she had pointed to a bunch of cars or dinosaurs or Legos. He goes, “Those are tampons.”  And the reporter looks at me and said, “He knows what they are.” And I said, “Well, why not?” Why wouldn’t he know the answer to those kinds of things? He doesn’t need to know the nitty gritty at 7 of periods and menstruation.

This is your home. People underestimate how aware children are. That they know what their parents are up to and feeling. And adults lose sight of that. They don’t get it.

They don’t. People are like, “Dana, how are you doing all this?” And I’m struggling. My kids see that running a global NGO and running a national consulting firm is tiring. It’s hard. It’s not sustainable. I let my kids know that. I think it’s important to let kids know its not Stepford Wives/Donna Reed/Everything is Perfect. No. My hair is always a mess. I suck at cooking. The kids know that men cook because my husband does all the cooking. We’ve had to level set and equate it to “Anybody can cook” because you don’t want it to go too one way or the other. They assume that men cook because children know what they see. It’s wild to see how they’re watching all of this.

This has been interesting. I’m trying to coordinate playdates for my 5 year-old. Recently, he had a playdate. The father says to me, “Hey, when my son comes over, you don’t have bras and maxi pads laying around everywhere do you?” Some days we do and some days we don’t. Right now, I have 6100 bras in my basement and 40,000 menstrual products that need to be donated.

Right, because you are actually helping women in need.

I didn’t know my life was going to take this interesting path. For 20 years, I’ve been in disability advocacy and IT consulting on the technology side of things. This is a very cool unique curve ball that I’m happy to be part of. I don’t have a background in social work, I don’t have a background in women’s studies, I don’t have professional experience dealing in the arena of poverty. Again we’re talking about making websites compliant for people who are blind can read them, right so that’s very different than how are we helping developing nations like women in Islamabad get maxi pads.

How has feminism evolved for you over your lifetime?

For me, feminism is clearly deeply rooted in equality. I was somebody who, as a teenager, had no problems identifying as a feminist. I’m somebody who, at 40 years old, has no problems identifying as a feminist. I think that, in general, feminism at its core hasn’t really changed for me. I think there have been times in my life when I’ve been louder and prouder about it and there’s times where its just me. I think there have been different times when I’ve been more adamant about different issues. I’m more vocal about different issues. But at my core I don’t think feminism has changed. I think once a feminist, always a feminist.

Have you ever gone through a stage where you were angry?

I wasn’t angry growing up. I don’t think I had a time as a teenager to be the brooding angry teenager because my father, who I was very close with, was sick with brain cancer for most of my childhood. He passed away when I was twelve and a half. A lot of my childhood, my coming of age years, my teenage years were also spent tackling grief issues of the loss of a parent. That gave me a little bit of a different sense of prospective than most high school teenagers have. Not everybody watches their father get sick and then pass away. I had a different empathy for people that not everybody has. So much of my childhood free time was spent in hospitals, you know, like doing my homework at the nurse’s station because the light was better or my dad was sleeping. And who am I as a person and also dealing with other responsibilities that other kids didn’t have to. I have a younger brother who is five years younger than me; I was one of these kids who was very responsible, albeit nerdy.

So you were classic first child.

Yeah. I was a good student. I was involved in a lot of extra curricular activities. I didn’t have time to be angry. I was angry that I just lost my father. I don’t think I had the space to be angry about women’s equality issues although I took women’s literature classes. I like to learn from women. A lot of my teachers in high school were women.

Were you a writer? Like writing in your journal a lot?

I just found a poem I wrote when I was like 14 or 15, a very feminist focused poem. It’s not winning any poetry awards. It will give you a hint into Dana as a 15 year old. I was still kind of a loud outspoken teenager on women’s issues. 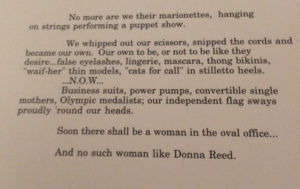 And thank goodness for that!

For more information on how to donate bras and feminine hygiene products to Support the Girls, go to http://isupportthegirls.org/how-to-donate/