I have been friends with Lynn Harris for decades. She has always been a supporter of women, someone who you meet and immediately has figured out three other women you should talk to about your passion; she’s that awesome, that generous a person. She wants for you to succeed, in all areas of your life. We met when she co-created Break Up Girl and she was for me a superhero extraordinaire, doing stand up, and being an all-around supportive girl friend. Not that much has changed, other than getting married, having children, moving to Brooklyn and starting Comedy GOLD, a comedy school for girls and women. I had a chance to see Lynn recently and ask her all about #comedyforgirls.

So you’re starting a comedy empire! Can you tell me more about it?

Comedy GOLD is a just-starting start up designed to give girls and women the tools to find their funny and the places to share it with the world. We’re going to offer classes and resources and community and curated content both online and offline. We want to be able to provide face-to-face classes the old fashioned way. We also want to be able to reach that hilarious weirdo kid who thinks she’s the only person who gets her own jokes at a terrifying high school in Texas and she can’t just take the subway to UCB (the Upright Citizen’s Brigade Theatre). We want to be able to reach girls like her. Comedy itself is viewed and produced on so many platforms; they’re not just in comedy clubs.

What does GOLD stand for?

So Comedy GOLD will be the go-to place for aspiring comics?

This is the place where you can come to figure out why and how you’re funny. How you can be funnier. How you can put that out into the world. How that will change your life. We’re going to have tech tools that help you figure out what your comedy voice is which—spoiler—is probably pretty close to who you are already, which is great. That’s the mission piece of this. A lot of people say, “Oh I would be so funny if I weren’t so shy” or “I’d be great at stand up if I had more confidence.” The thing about doing comedy is that you have to figure out your authentic voice.

What does “figuring out your authentic voice” mean?

Will Comedy GOLD be just for girls?

The entry point is girls and women. I am quite sure there are women—my age your age—who were not encouraged to be funny in one way or another when they were younger. Who are out of fucks to give and want to figure out how to be funny but no one ever taught them how to write a joke or whether they want to use it in their personal lives. Or how being funny at work. Even in a corporate setting, how can you make a power point that’s not death? They tell you to open with a joke but they don’t tell you how to write that joke. I would love to bring standup and comedy into those settings probably because it’s a different bunch of skills you get. Improv helps you figure out how to play on a team, which is great, but women know how to play on teams. We want girls and women to be loud on the mic and be in charge.

What is your background in comedy?

I did stand up for a long time. I still do. I ran and co-produced and co-wrote a comedy variety show for two years at Gotham Comedy Club called Breakup Girl LIVE which was awesome. It was like the Muppet Show; it was a show about a show and something goes wrong only it was superheroes and there was always a super villain. And then there was also like, Colin Quinn. 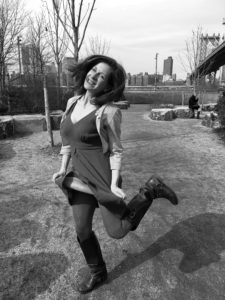 It was amazing. We wrote a whole new script every month and the script was integrated into the acts. The super villain would be sitting in the audience; we would break the fourth wall.

So you have a lot of experience in myriad aspects of the world of comedy—sketch, stand up, writing.

I feel like I can teach someone how to write a joke and how to connect that. Being a reporter has been helpful too. At the very beginning of the workshops, we have them do homework where they write “I hate it when…,” “I’m embarrassed by…,” “I’m scared by…” I tell them not to try to be funny, just answer the question. And then we put them right on stage with their papers, answering the questions. You have to ask further questions like, “So why is your uncle embarrassing?” or whatever. I find that my interviewing skills help me hear what’s the real story so it’s not a comedy experience per se but it’s relevant to figuring out who you are.

That’s a powerful tool to have.

I want to send  a message that is we all deserve to be highly paid for all this stuff and it will change the world.

For more info on GOLD, go to goldcomedy.com 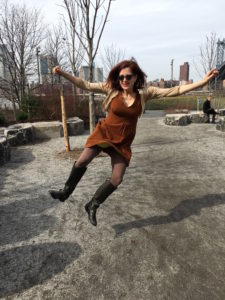