And now it’s time for a day in the life…

I wake up earlier than usual, 6am. Caught a beautiful sunrise. I capture the morning light for my Finsta, which I do every day, much to the chagrin of a few of my friends who follow me. I make the Teenager her lunch and prepare a bowl for Rocky. I take him out as soon as he finishes his meal. The Teenager is up and ready to go to school by the time I finish walking Rocky. Shower. Do some work. Watch Jimmy Kimmel’s plea for Health Care. My Mother is finally awake. I know this because the kettle is roaring. She leaves the water boiling without concern that it’s whistling. It’s not that she’s forgetful. She’s a multi-tasker. I leave the apartment at 10am. I bump into my neighbor Samantha. We decide to get Lola, her pitbull, and leave Lola with Rocky for the day. I like when Rocky hangs out with Lola; I feel like he has a buddy. I’m meeting a friend at Irving Farm. He arrives, as his is wont, on time. I like him, we have our history, and we’re on the other side of it. The shorthand is there. Familiar and comfortable. We walk to the park. I plan to sit on a bench and read The Woman in Cabin 10 until it’s time to do a conference call. I’m working on something I’m enjoying. The Teenager emails me. Others too. A lot to deal with this day, which again, is good. As you may suspect, I rally behind The Teenager when needed. Right now, she needs to take the SATs as well as the AP exams. Well, it turns out, in addition to juggling my own schedule, I manage the big picture priorities (education) of hers. And, sadly, sometimes some things fall through the cracks. This time it was paying a 93 dollar fee in order for her to take the AP exams. It came to my attention that I missed the deadline. That The Teenager could not take the exam at her school. That I would have to find another High School accepting registration that would allow The Teenager to take the AP exam at that school. At a school where she essentially is a stranger, where she would feel even more like a fish out of water, where she would experience even more testing anxiety than she already does. And here’s why I slipped: The Teenager’s school sends myriad emails–fundraising, weekly newsletters, other things too. Over the years, I’ve tuned the emails out. Ignoring them if you will. Well, as it turns out, I ignored the wrong email, the one that required me to pay a fee in order for her to take a very important exam, one that colleges consider when a prospective student applies to one. Set aside my feelings of inadequacy. There’s the school, and its insistence that I find another facility that will accommodate The Teenager. The school she attends? Prides itself on a high level of academic excellence. The support she’s getting from the school? Not so much. I try to shake off this nonsense but it’s difficult. And then I get the email that The Teenager’s cover is up and published on Hellogiggles.

Earth Hates Me by Ruby Karp. Pre-order now on Amazon!

I can almost ignore everything that’s made me cranky; seeing her cover online is beyond thrilling. The interview that accompanies the cover reveal, as well, is delightful. All feels good right now. I go home. It’s 4pm. Lola the pitbull is handing out with Rocky the pug. I walk the dogs. Usher my mother out of the apartment. We’re meeting The Teenager at 530 at Five Napkin Burger. I do a quick call as my mother and daughter find their table. We have dinner. We say good bye to my mother after dinner, The Teenager and I are going to the Signature, to see Annie Baker’s Antipodes. I’m happy to wrap my long day out with a two hour play (no intermission). Sitting in the dark, beside The Teenager, while being immersed in a play? Perfect way to end this day.

What is happening to gay men in Chechnya is horrible.

Where working women are not in the minority.

And now have a laugh with Sarah Silverman. 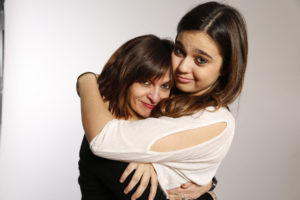