BARB Turning Pages: a Q&A series where writers reflect on the intersection of creativity and life

“He came to on the back of a horse. Weeping into his chest. The dreams he’d had, the man he was. Where was the hurt today. The throb in his balls was disco. The throb in his head was science. He’d had too much to drink, and he felt like hell. Believed in hell. And there in the sky: a bird, a plane, or just the drone of his fantasy life taking flight.”

—from the novel A Little More Human 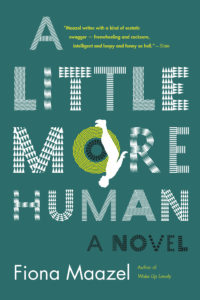 I don’t know that I welcome the creative process so much as notice my mind always thinking creatively about how best to tackle whatever project I’m working on. I almost rarely get to the computer these days (I have a toddler), but that doesn’t mean I’m not wrestling with problems posed by the limits of my ingenuity when it comes to expressing X, Y, Z. Narrative strategies are always on my mind. Stakes. Drama. Of course whenever I do manage to find time to write, I am thrilled. But writing is often really so much more about what’s happening before you even sit down. I always tell my students to make the time and sit in the chair. For hours and hours, you must sit in the chair. But this isn’t so realistic for a lot of people. So an alternative version of sitting in the chair, at your desk, is just making sure some part of your mind is available for creative thought even while you’re making dinner for your kid or working your money job. How to do this? It’s not much different from multi-tasking. It’s just about allocating resources.

Oh, I’ve always said that the fear and doubt that necessarily accompany the writing life are already amply checked by the ego it takes to pursue this life. You have to think what you have to say matters. You have to think you have something worth saying. But of course a good writer also has to know that what she has to say is utterly banal and hackneyed. The trick is to hang out in-between these poles though most of us just jerk from one pole to the other. The way I deal with all this is to try to forget about the quality of what I’m doing—for better or worse—and just sink into the process of trying to say anything at all. The process is fun and challenging, and so long as I’m in it—deep in it—I lose sight of the poles entirely.

I’m not sure I can reduce writing to a word or feeling. Not because it’s so rarified or complicated but because it’s still many things at once for me. It can be engrossing. Fun. Difficult. Unpleasant. Thrilling. Euphoric. Depressing. And so on. Is there one anything that covers all that?

I might be a Neanderthal here, but I never really think about inspiration or influence. There are books I love and music I love and paintings and movies and sculpture. But I don’t know that I am specifically inspired by them beyond being stirred to produce something beautiful for having seen or experienced something beautiful. Of course I admire many artists for their talent or their brinksmanship or even for something specific like how well an artist can absolutely slay you with work—c.f. Jim Shepard’s The Book of Aron—but like I said before, I am either a Neanderthal, a solipsist, or just unaware of how much my engagement with art inspires what I do. 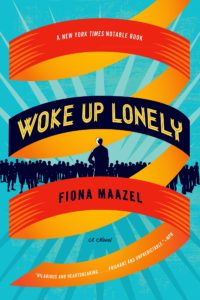 That I will find my way eventually. I got stuck so many times writing my first novel. Then I got stuck even more times writing my second. And again writing my third. So it’s not like the work has gotten any easier. The only difference is that I panic less. I trust that eventually I will surmount whatever obstacles are in my way or just sidestep them or backtrack. It turns out difficulty isn’t the end of the world. As it’s recently been said re: despair over the election: the only thing that’s the end of the world is the end of the world. Doesn’t mean I don’t despair but that even my despair is a little less intense than it used to be.

I once showed a draft of my first novel to a friend who said, in response, Okay, but so what? I’d written about a guy with night terrors, which seemed like enough to me. Until: “so what?” at which point I realized I hadn’t written much at all. Where were the stakes? What had I mobilized thematically around this guy to ensure the novel was operating in multiple registers? Not much, apparently. And it’s not that I wasn’t interested in the big questions but that I seemed to have sidelined them for reasons I can’t fathom today except that I was young and inexperienced and too busy showing off in other ways. Nowadays I don’t really have to remind myself to stake my fiction in something that seems important to me—this comes naturally—but I do have to remind myself to make sure my work is moving fluidly through multiple registers so it’s never just plot or just polemics, etc.

Oh, I might like to talk to myself at 22 and tell myself to make some different choices. Though this is a hard one, of course. If I’d done anything differently then, I might not have what I have today. I suppose—to guard against rewriting history and, for instance, accidentally writing my daughter out of my story—I’d tell myself just to be a little more confident. A little less unhappy. I’d tell myself that one day I’d be 42 and the happiest I’ve ever been. But I wouldn’t have believed it then, so I’m not sure this exercise would be all that profitable for me!

To be honest, it’s only in the last few years that I’ve even noticed that I am female. Not biologically, but insofar as I am not male—not granted all the privileges and power that come with being male. For most of my life, I just never noticed. I never thought of myself as a female writer. Of course I’ve always been involved in activism that stumps for women’s rights, and, sure, I’ve been groped and mansplained and patronized ad nauseam, but it really wasn’t until the election that all of this began to register with me in a new way. I started to feel outraged on a molecular level. Began to wonder how my work might have been received if my name were Frank. Began to think through how much of my life has been governed by opportunities missed or denied me for being a woman. It’s really late in the game to be coming to this awareness, but there it is. I used to think: well, yeah, any self-respecting woman is a feminist—do we really need a word for this? But nowadays, given who the leader of the free world is and his active attempt to catapult us back to the Dark Ages, I’m happy to wear the mantle of feminism and brandish my sword.

I am actually judging a competition right now, so there are basically books everywhere. On my bed, tables, couches, the floor. And in giant boxes. The only book within eyesight that’s not part of the competition is Martha Cooley’s new memoir, Guesswork, which I cannot wait to read. There are few writers out there smarter than she is. She’s also a phenomenal sentence maker. So that’s my post-competition treat. 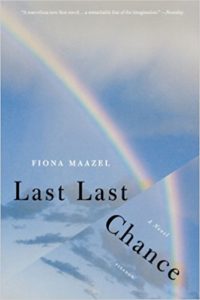 Fiona Maazel is the author of Woke Up Lonely and Last Last Chance. She is winner of the Bard Fiction Prize and her work has appeared or is forthcoming in the New York Times Book Review, Harper’s Magazine, Ploughshares, and Tin House. She lives in Brooklyn. 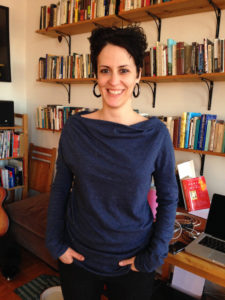