Full disclosure: Lizzy Goodman and I know each other, although not from the Darkroom, the legendary bar featured in her book, Meet Me In The Bathroom: Rebirth and Rock and Roll in New York City 2001-2011. Mutual friends, like that. We’ve seen a movie together. She’s tried to set me up with a musician or two. Eaten at random places around the city over the years. I adore her and I was so happy to hold her book in my hands. Lizzy Goodman spent the formative years of this prolific scene with some of the artists that forged it: The Yeah Yeah Yeahs, Interpol, The Strokes, and so, so, so many more. Reading Meet Me In The Bathroom is a direct view to all the hours not in daylight (actually, this is a line from the book, by Moby). An oral history by the musicians spawned in the studios  on the Lower East Side and Williamsburg. A book about music that can fit nicely next to your copy of Please Kill Me. Yes, it’s a must-have, an education, an entertaining first hand account by the people who created songs that sit forever in my heart: “Maps,” “A-Punk,” “Last Night.”

So I finished your book…

You read the whole thing? Omg.

Yes! Of course! I used to listen to our friends talk about going to the Darkroom. I went once and said, “Right, Got it.”

I think you kind of did it right because now you can just read about it and you don’t have to have damaged your liver with us. This is the way to do it.

You are so right. I love this snapshot into a moment of time in the history of music. And the trajectories of the bands—the Yeah Yeah Yeahs, the Strokes, LCD Soundsystem. Why these artists?

When I first started thinking about writing something about that chunk of time and trying to kind of imagine a structure for it, I thought about doing a collection of journalistic pieces. I was brainstorming a bunch of different ways to get at that chunk of time in a holistic way. The oral history format obviously lends itself incredibly well to that kind of problem, where you have too many stories happening all at the same time intertwined with each other and also distinct from each other. What would that look like? If you could actually pull that off, it would be amazing. You would have to have Karen O (of the Yeah Yeah Yeahs), you have to have Julian (Casablancas) and you have to have James Murphy. Those figureheads are kind of the world of New York City. You couldn’t do it without the underpinnings of those key narratives. The Strokes are kind of obvious: they were the band that went first. They opened all these doors. Record deals happened. Bands that don’t even know they were helped by that by The Strokes were helped by The Strokes in terms of the receptiveness of the audience, the receptiveness of the industry. Karen, because she is to me, the takeaway rock star of this era. She’s just the most badass personified from the vulnerability to the mania to the beautiful destructiveness to the violence to the grossness to the beauty and the willful ugliness. She is the god. I would say goddess but she’s like a gender neutral god. And then James’ role. I knew the least about DFA. I didn’t know anything about their world, I’d never written about them, I’d never interviewed any of those guys. It was kind of the most impenetrable and it required the most research and actual straight up journalistic endeavor on my part to go and get into. I knew James was important. He had this whole life—self-described indie rock guy in New York—and then he had this rise to fame as this legendary deejay and then LCD. The intellectualism and the wittiness that DFA represented and LCD captured in their music, that’s the best part of Brooklyn. So those three that’s why.

…and then Interpol who are so cool. A couple of people have said are they as important as these other bands? And yeah man. Like, yeah. Maybe this is one of those ones that I’m skewed on because I was there as opposed to having observed it from the outside. There were two heartthrobs on the Lower East Side for women of my immediate generation in 2001, 2002, 2003 and it was Paul (Banks) and Julian. I don’t mean to make it sound like Interpol was only relevant because girls had crushes on Paul. I knew plenty of people who were just like this music is my heart and that was as true at that time as it was about The Strokes as it was about any of those bands. It seemed a completely obvious one. 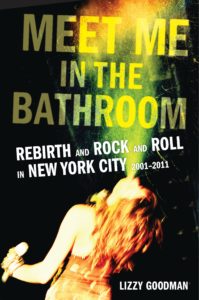 What did you discover about the metrics of success for a band?

That’s a really, really good question. I mean this is a metaphor for life probably; I relearned things I already know. There’s the Bob Dylan line, Even the President of the United States sometimes must have to stand naked. Of course, there’s such a thing as success but success is in the eyes of the beholder. I knew this before but now it seems even more apparent in talking to all these people about their experience. Success is often perceived when it’s on this level as this one thing. It’s felt by the person living it as completely different. I think you can get into dangerous territory in this line of conversation by sort of woe-is-me, the famous rockstar as a lonely isolated character. One of my favorite lines in the book is from Albert Hammond Jr, he’s just like, I don’t know how to explain it, success depressed me. I think it’s a really brave thing to say. Almost everybody feels it. There’s this sort of this momentum when you’re gunning for it and then you get it, it just blurs, and there’s this kind of lull, morning after Christmas feeling. Everybody has to contend with failure and that’s tough. I really re-learned that that whoever is standing in the center of this fantasy storm that leads to success is having a lot of complicated feelings and it won’t last and that’s part of it.

What I also really liked about Meet Me In The Bathroom was these rock stars, these musicians? They’re people with dreams. You’ve humanized the mythical figure.

That’s the way these people who live these fantastical lives are also just like us. Everybody faces a period where they aren’t quote unquote young anymore. Some weathered it better than others. You can not be young and beautiful and promising forever, no one can. A lot of people have addiction issues and depression and various mental health issues. It doesn’t escape me that we’re having this conversation on the day Chris Cornell has died. I mean, look this is life, it’s heavy. This is a person who was once in the role of a lot of people in this book. He was also very successful, he was on tour, it’s not like it all fell apart. Life is heavy.

I often wonder with musicians, like my friends who toured and played every shit hole in the world, what happens when you put your guitar down?

Yeah, what do you do when you put your guitar down? All these artists are diversifying. I’m putting out this book at a time all these people are on tour and making new albums and doing stuff and engaged still in their work. Grizzly Bear are making a new album. The Strokes are doing stuff. LCD Soundsystem was on Saturday Night Live. There’s this sense of momentum with a lot of the key bands that feels consoling. Nick Zinner said that no one in the Yeah Yeah Yeahs wants to be in a band every day. These are people who do other things in theory. In the case of slightly younger generation bands, they were not forged in an era of like, yeah cool I’m going to make an EP, get signed to a major label and then buy a chalet in France. That idea of rock excess and success monetarily on that level is not part of the equation anymore. That’s a good thing because it insulates you against the idea that you can do this forever and get paid to do it forever. That always seems a little bit shady.

I agree. I love that you’ve given us this record. I want to thank you for this. For those of us who couldn’t get to the Lower East Side or to Williamsburg, Meet Me In The Bathroom brings us a little closer.

I want to say one quick thing about what you just said. That’s what I wanted for the book: this is for everyone who was there and this is for everyone who at any point realizes they wished they had been there. I was lucky to have been present, like dumb luck. to be around for something really beautiful. And I wanted to create the potential for other people to immerse themselves in what it felt like to be there. 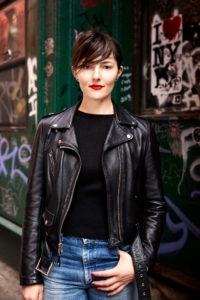