Here we go. A day in the life.

Rocky must know it’s Saturday because he lets me sleep in until 9am. Still, he wants me up. He gets fed. The Teenager is not going to be woken up until 11, because last night she was at Gov Ball, seeing Lorde and other bands (which? no idea, didn’t ask, if it’s not Pavement, I have no interest.) Now I’m up. Very awake. I shower. Take Rocky for a walk. It’s a gorgeous sunny blue sky laden day. I leave Rocky at home. Run errands. Bagel and cream cheese for The Teenager. Milk, other provisions from Zabar’s. Text with The Boyfriend a little. Home by 10:30. Check to see how we’re doing with the #showyourwonder Wonder Woman giveaway. Wake The Teenager up. She’s exhausted. Of course she is. She has a long day ahead of her. I move gingerly. She needs relative quiet. I bring Rocky to Samantha’s; leave him with Lola for the day. I go to 72nd street, get a manicure. Zoya’s Yasmeen applied to my nails. Cuticles taken care of, for a twist. The Teenager meets me at 1. Showered, dressed comfortably. We hail a taxi, head to the Jacob Javitz Center. Bookcon 2017. To support  The Teenager’s book, Earth Hates Me.  No idea what awaits. The Running Press publicist gives us the good advice to enter on 37th street. We do that. We enter the high ceiling glass sculpture that is the Javitz Center. The Teenager was here two years ago, as part of Sophia Rossi’s panel. Sophia is co-founder of Hello Giggles. The Teenager wrote for Hello Giggles for most of middle school. Now she’s a Junior. Here promoting her own book. We meet the RP squad–Val, Jessica, Cassie–and they answer questions and tell us things. The Teenager’s literary agent Mark is also here. I feel happy for The Teenager, that she has support. We are shown the incredibly enticing Earth Hates Me chocolate bars. 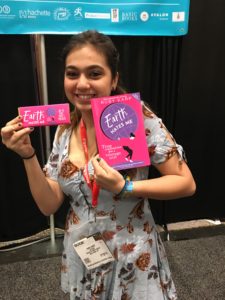 We both gasp at the beautiful looking bound copy of the Earth Hates Me chaplet–three chapters of The Teenager’s writing–, now in her hands. She is told a litany of things. I try not to helicopter. Give her space to work. She’s shown her signing location. I am nervous for The Teenager. I have no idea what to expect. There are a lot of authors here, signing books. Lots of teenagers walking around too. The Teenager and I walk around as well. We see the author of Feminist Ryan Gosling, our friend Danielle Henderson, going down the escalator. Wave to each other. II take a photo of The Teenager holding the chaplet and a chocolate bar. At 2pm, things begin. The signing that is. I turn my head for a moment. And that’s when I see it. There is a line forming. Beyond the eye can see. Wrapping around the Hachette booth. 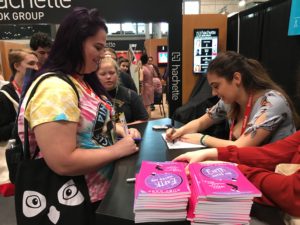 I watch my child speak to each person, as she signs the chaplet, personalizing each signature, asking the person a specific question, such as “What grade are you in?” “How old is your daughter?” “Library?” I look at Mark. He is beaming. We both are in fact. For a moment, she’s ours. It’s feels exquisite to share this with him, with someone. I miss Kendrick right now. Want him with me. To see this. This young woman, making this person, that person feel special, if only for the moment. Eye contact. Smile. Signature. Chocolate bar. Next. She’s seamless. I take photo, photo, photo. At the half hour mark, Val, the RP publicist, whispers that chaplet supplies are running low. The RP squad cuts the line off. Don’t want to disappoint. Done at 2:45. We take a group photo of the RP squad, which also includes their boss, the publisher of RP. The Teenager is told she has a little time before her next event, a panel at 4:30. I insist on eating. We head down to the lowest of the lower levels to the food court. Get a tepid excuse for a meal. Find a spot to eat on one of the upper levels. We see the author of Wonder. The Teenager had met her the other night at an Amazon event. They speak, old friends at this point. At 4:15, we head to the downtown stage at the Jacob Javitz Center. Enter the green room. No one is around. We enter the actual space. See Scott Rogowsky, the host. 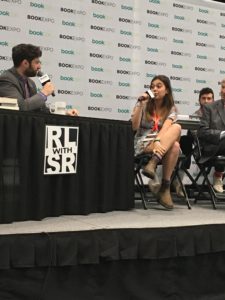 We introduce ourselves. His dad/co-host, Marty, is here too. People often ask if I am proud; I know Scott’s father is proud of his son, as I am for my daughter. But these things? It’s beyond a sense of pride. It’s an unconditional joy for the experience she is exposed to. I’m simply so happy for The Teenager. Everyone is in a jovial mood. At 4:30, Mark and I sit with the RP squad. Watch Scott interview The Teenager about being in high school, Earth Hates Me, her mom. He shows a clip from Smart Girls At The Party, circa 2008. The Teenager at seven years, three quarters discussing feminism with Amy Poehler. The interview ends. I meet The Teenager in the green room. Walk with her outside. She is heading to Gov Ball. Seeing WuTang, Childish Gambino. I watch her get into a cab. It’s 5:30. Both of our nights are only just beginning.

My interview with Cindy Gallop is up! She once lived in the “black” apartment. What a woman!

Scarlett Johannson:  “When women talk about enjoying sex, it’s almost forbidden. Just having a healthy sexual attitude, you are labeled as loose, wild, a slut. You have no morals, and you’re seen as some kind of sexual deviant or someone who can’t be in a monogamous relationship.”

When you go Kondo in your marriage.

In celebration of Wonder Woman! And yo, the box office!

And now have a laugh with Rosie O’Donnell.