Once a year, ever since 2005, The Teenager and I head to Coney Island with a gaggle of her best friend’s friends and random adults and we walk in the legendary Coney Island Mermaid Day Parade. It is always the best day, for a variety of reasons. That New York shows up, that New York participates, that New York celebrates. Marching bands. Mermaids. Pirates. Creatures of the Sea. And everything in between. 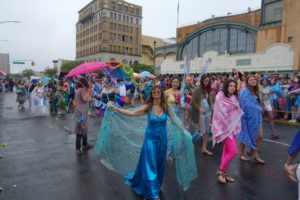 It was a rainy Saturday. No thunder, just on occasion, buckets of rain. There were about 20 or so of us, several adults, mostly teenagers, some underlings. I huddled in the car with a few teenagers, one of them The Teenager. During the worst of the downpour, the Grand Dame of our group, Maren, trudged cross the parking lot, like the champion she is, to get our wrist bands, the ones you need in order to march. There was talk, in the warmth of the car, of not-marching. But seeing Maren come back, resplendent, smiling, despite the rain, put aside the nay-saying. The rain, as if on cue, dissipated. And by the time we did our group shot in the parking lot–our de facto staging area–the rain was just a spittle. We walked to the official starting point, and began our march at about 1. 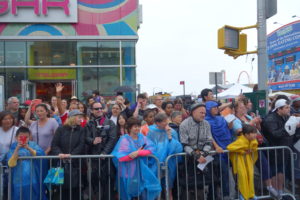 It was encouraging to see people lined up, to see the cops enjoying the view, to see our fellow Mermaidians doing the march. Rain or shine, the Coney Island Mermaid Parade goes on! 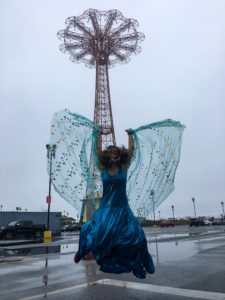 Have you read Roxane Gay’s Hunger yet? I’m going to devote a post to it later this week, but if you haven’t yet, do so. Now.

A look at the Color Purple.

It’s complicated, critiquing women. Because the feminist in all of us wants to support the rest of us. But what happens when we see something, do we say something? I say, yes, yes we do.

Olivia Wilde and Al Franken. That is all.

Live Fast Die Old is the Age.ist motto and I’m down with it.

And now have a laugh with Wendy Liebman.