I read Roxane Gay’s book, Hunger, in spurts, over a few days. It is more than just a memoir on being fat, although, make no mistake, fat is the thrust. Living, walking, breathing in a six foot three body that is fat. (Terry Gross does a great job of embracing the word fat, and getting permission to in their Fresh Air interview.) I am still processing the power of this book, and in particular, the devastating gang rape she endured at the age of twelve, by her boyfriend and his friends. How Gay turned to food as a salve, and fatness as a wall of protection from men, who in that awful cabin, showed their power over her. How difficult it is for her to walk, to use steps. How alone she feels. All of it. All of it. All of it. Still with me, these days later. I urge you to read Hunger. Not to shy away from it. It’s worth your time. “I grew up in this world where fat phobia is pervasive. And I just thought, ‘Well, boys don’t like fat girls, so if I’m fat, they won’t want me and they won’t hurt me again.’ But more than that, I really wanted to just be bigger so that I could fight harder.”

Naomi Klien: Right now, what we are seeing is Trump shocking the public every day with his outrageousness or his blunders; it’s kind of like a rolling shock doctrine. We’re all clicking on the Trump show, and meanwhile they’re methodically transferring wealth from the lower and middle to the upper, upper echelons of the income ladder. And that is less sexy than Melania slapping his hand away, which isn’t in the book.

Women of color, in Louisiana.

For fucks sake, leave moms be. As someone who has raised a child on her own, who has earned every cent she’s made, who has taken leave from employment to parent, who has been forced out of employment, who is constantly worried about making ends meet and who has raised a feminist, I can wholeheartedly tell you that every choice a woman makes once she becomes a mother is HER choice, and not for anyone to judge.

Also, as a woman who dreads small talk, I love knowing the secret to it.

Teenagers and summer jobs. Or how they’re not getting them.

Oh, when you interview a nut job, please can you do a good job? Thank you.

Oh how I want my hair to be pink again. 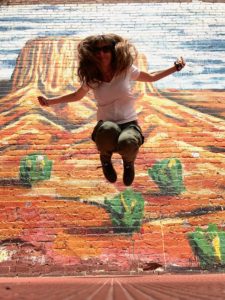