Mountaineer and adventurer Annie Smith Peck is one of the most accomplished women you’ve never heard of. Peck conquered the highest peak in Peru in 1908 at the age of 58. She was revered and admired by Amelia Earhart, Theodore Roosevelt, Woodrow Wilson, Carrie Chapman Catt, and dignitaries and statesmen all over Latin America. For her 80th birthday, she was thrown a party by the Society of Woman Geographers. She was the ultimate underdog who successfully occupied the male realms of sport and politics at a time when she was expected to climb in a skirt, way before she had the right to vote. I had the opportunity to speak to my friend, Hannah Kimberley, author of A Woman’s Place Is at the Top, and what led her to write about Annie Smith Peck.

The first thing that struck me about Annie Smith Peck was that this Victorian woman was a badass even by today’s standards.

One of the most remarkable things about Annie is that she set high goals for herself, and she never considered her age or her gender when it came to fulfilling her goals.

Annie was told throughout her life, from the time that she couldn’t do what she wanted because she was a woman or because she was too old. For every no, she responded, “yes, I can,” and then she kept on trucking along.

I understand one of her earliest brushes with mountaineering fame had to do with her wardrobe choice.

In 1895, Annie climbed the Matterhorn when she was 45, and this was not a spectacular feat since there had already been plenty of women who climbed it before her. However, she gained recognition for her climbing costume in the press. Instead of climbing in a long skirt or dress, which most Victorian women climbers did, Annie climbed in pants, and this became something of a talking point in the press. At the time, some women were being arrested in the U.S. for wearing pants in public, so it was kind of big deal for her to pose in her studio portraits in pants.

This gave her what she referred to as “unmerited notoriety,” so she decided run with it and  climb where no women had climbed before. Two years later, Annie headed to Mexico and climbed Popocatépetl and Orizaba. No woman had a claim on Orizaba yet, and this mountain gave Annie the altitude record for women at the time. Still not satisfied, she then made plans to climb where no man had climbed before – to “conquer a virgin peak” as she put it. Annie then spent the next decade climbing in South America in search of the apex of America, the highest peak in the western hemisphere. It took her five attempts to make it to the top of Mount Huascarán in Peru, where no man had climbed before.

Bear in mind, Annie reached her highest peak at the age of 58, which was pretty extraordinary in 1908. And she did a lot of climbing without professional guides. Modern climbing gear like fleece and Gore-Tex, carabiners, and satellite phones didn’t exist. Neither did energy gels, water purification tablets, or sunscreen.

Years after she climbed Huascarán, a German climbing crew claimed to be the first on its peak. But the Geographical Society of Peru had already named the north peak “Cumbre Ana Peck,” to ensure that folks knew she was the first to climb it and that she was a woman.

Let’s give these accomplishments context, what was life like for women during Annie’s time in the turn of the century?

Well, you have to remember that this was during the Victorian period. Women did not have the vote. They couldn’t run for office, and very few of them had higher education beyond high school, or even careers, for that matter. And when they did have careers, they made less on the dollar than their male counterparts — I know, some things haven’t changed, right? So her prospects were pretty dreadful when it came to making her way in the world on her own.

Also, middle-class white women during Annie’s time were expected to get married and become mothers. They sewed, played piano, and were well-read although there weren’t many venues out there for them in which they could exercise their talents, much less make money from them. Once a women got married, if she did have any property or wealth, it automatically became her husband’s. So getting married meant that you’d lose monetary autonomy.

Annie decided from a very young age that she did not want to become a wife. She wanted what her three brothers had, which was an education and a means to support themselves. So she went out and got it without the help of a husband. Even into her eighties, folks still referred to her as “Miss Peck!”

And because she wasn’t associated with a university or a wealthy husband, she had to raise all of her funds to climb and explore on her own. So this meant going on a grueling lecture circuit and getting backing from newspapers and various sponsors. In her heyday, you could find Annie’s image in the box of a Singer sewing machine or on an ad for a typewriter — she did anything she could to pay the bills. And still, she was usually broke. 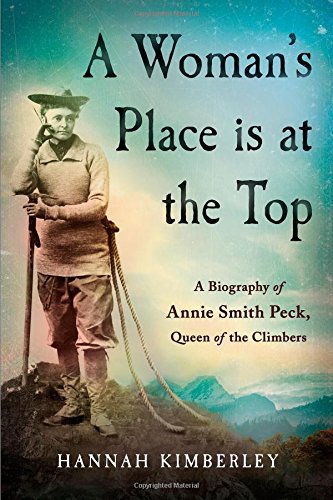 What drove her?  How do you account for her tenacity?

I think that Annie’s family sort of ruined her “victorian ladylikeness” in a way. They insisted that she read a lot. And so she did. Also, her high school teacher was a feminist, and she assigned works by Margaret Fuller to read. And once you go down that feminist route, well, you know, there’s just no going back. So by the time her parents told her that they didn’t want her to go to college or earn a living, it was simply too late.

Also, Annie was very influenced by the Civil War — her brother, George, was a Union soldier. So she put a keen eye toward politics in her early teens. She met generals and politicians at a young age — and these guys were like celebrities at the time. So all of this influenced her thinking in terms of being involved in education and politics.

Then she started going to lyceum lectures and hearing abolitionists and suffragists speak and she became very influenced by them. As a teenager, Annie became a big fan of Anna E. Dickinson, who was an abolitionist and a suffragist and also a very talented orator. So it was Dickinson who gave Annie the bug to become a professional lecturer.

I asked you a few days ago about Annie’s legacy and you referred to this quote from a recent review of your book: “I’m inspired by Annie’s gumption, her willingness to live her life on her own terms, and to forget about the artificial limits we put on ourselves because of our age or gender.” What does this mean to you?

I really loved reading this quote in a review of the book! It’s perfect, really, in that Annie’s story is inspiring, but also sad in a way because age and gender are still factors that can work against us today. So I like the idea that Annie comes before us as a historical role model who says, “I’m going to do what I want because I can,” and whenever anyone told her no, she persisted and did what she wanted to anyway.

How has your approach to feminism evolved?

I would say that when I was younger and didn’t know any better, feminism was all about me. I saw how I was treated differently than the boys around me and was angered by that, but took little notice of the rest of the world outside of my own sphere (in the late 1970s, I would march around the house shouting, “ERA! ALL THE WAY!” and my parents never could figure out where I got that from). So, I viewed feminism only through the lens of myself. But! Thank goodness for college, where I was introduced to people like Judith Butler, Gayatri Spivak, Gloria Anzaldúa, and bell hooks. My view of feminism is no longer that it is a hierarchical concept, but one that involves everyone, so I see it as more circular and all-encompassing, or as we are hearing folks say more and more these days, “intersectional.” I guess that’s one of the great gifts of getting older — we realize that we always have the right to change our minds about things.

Purchase A Woman’s Place At The Top by Hannah Kimberly here.

Kathryn O’Kane is a director and producer with over fifteen years of diverse experience in television, advertising, and web media.  She is honored to serve as a board member of  New York Women in Film and Television, which supports the careers of women in the entertainment business: www.busyk.com