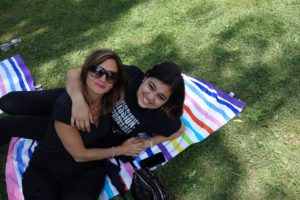 We’ll be back on Tuesday September 5! Have a great Labor Day Weekend!

Kathy Griffin: “Why are people still expecting me to apologize and grovel to a man that tweets like this? I’m a comedian; he’s our fucking president.”

Claire Messud: “Very few people spend their whole life with their first love. And very few people are best friends from the age of five until they die. Some people are—lucky them—but for most of us, that passage, that loss of your first best friend, happens at some point.”

Going to a wedding?

I’m one of these folk, feeling this way.

And then there’s the paralyzing post-partum.

If you’d like to help those affected by Hurricane Harvey, here are some organizations to check out.

The Coalition for the Homeless is an umbrella organization coordinating shelters and orgs across the city.
Coastal Bend Disaster Recovery Group: “Our mission is to strengthen long term recovery by addressing unmet, disaster-related needs of individuals in the community. Membership is open to anyone who supports our misssion and signs our Code of Ethics Agreement.”
Corpus Christi Food Bank: “The Food Bank of Corpus Christi reduces hunger in South Texas through food distribution and nutrition education.”
Galveston County Food Bank: “Lead the fight to end hunger in Galveston County.”
Heart to Heart had a disaster response team and mobile medical unit deploying Friday morning from Kansas City to arrive in Texas ahead of the storm.
Houston Food Bank:”Children, families and seniors in Southeast Texas are in need of food, water and supplies.”
Portlight is a local grassroots organization that provides disaster aid to the disabled specifically: “Hurricane Harvey has wreaked havoc over the east coast of Texas and isn’t going to let up anytime soon, the Partnership has set up a hotline (800) 626-4959 to refer people with disabilities who may be in the affected areas to locate services and resources they may need.”
Samaritan’s Purse disaster relief units are now pre-positioned in Texas as residents continue to struggle with rain, flooding, and destruction caused by Hurricane Harvey.
Southern Baptist Disaster Relief (SBDR): “Families urgently need your help.”
SPCA of Texas: “As the organization prepares to deploy disaster response efforts in North Texas to assist the Gulf Coast, support for this effort and for all of our programs and services is critical.”
Texas Diaper Bank : food banks don’t supply diapers, which people desperately need.