Lady Parts: A BARB Beauty Series
by Stacy Conde
This edition: The Messy Bun
by Chris Rios
Beyonce isn’t the only one with a glam squad. We mere mortals need them too. Early on I established my crew: hair stylist, colorist, esthetician, waxer (brow and nether regions), masseuse, make-up artist. It takes a village to keep me together and these people are my glam rocks. They tell me when it’s time for a change; and they keep me from doing stupid things… tho’ no one was around in Napa back in 2014 when I decided to bleach the ends of my hair and dye them bright pink. I have only myself to blame for that.

Turning 50 ushers in a world of style decisions that I’ve been weighing up for years. So now, at this half century mark, it feels necessary to quantify and qualify the do’s and don’ts. Before we all go full Iris Apfel (make no mistake – we will), let’s consider what we can get away with.

I met Chris Rios way back in the mid-90’s when “The Rachel” haircut was in full effect. Chris never once suggested that I go that route. Instead, she gave my hair the makeover it needed to fit in to my adopted LA lifestyle. Now, some 20 year later, Chris is still making my hair behave and she forgives me when I stoop to box color in a pinch.

I’m not one for a lot of time consuming styling work, so I always have a hair elastic on my wrist and more often than not, the chances are extremely high for a top knot by the end of the day.

Wouldn’t it be fab if we could do a messy bun like the pros?

Stacy will be back next week with another tip. Send us your Lady Parts topics and we’ll include them in upcoming features. 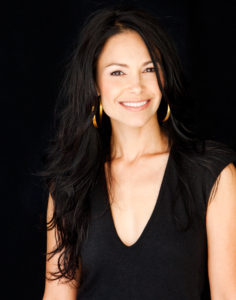 Chris began her career in hair twenty years ago as an apprentice for Allen Edwards himself.  Since then her sought-after ability and positive force has taken her all over the globe, making her one of the most traveled people in the hair industry. She has worked with top notch megastars on major music videos, movies and red carpet events; and top models for magazine spreads and ad campaigns.  Chris has a passion for bringing high fashion looks to everyday women and men.  Her salon clientele ranges from sixteen year old fashionistas to the stylish, hot moms of Los Angeles. 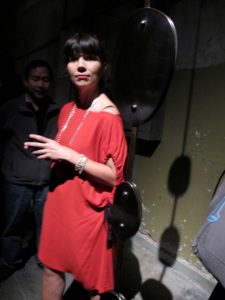 About Stacy, in her own words:

I am a displaced Indiana Hoosier who spent my early years riding in vans with bands while I did marketing and PR for the best indie record labels in Chicago (at that time): Wax Trax and Touch & Go. I’ve been a New Yorker (twice), a Londoner (briefly), a desert dweller and an Angeleno (three times now).  I’ve run marketing departments for major record labels.  I worked for Damien Hirst for a short time. I had the distinct honor of working on the premier season of GLEE and I traveled the rails and worked on the Station to Station tour with uber-artist Doug Aitken. The Kills are in high rotation on my iPod as is a smattering of classic 70′s rock and every Tom Waits album ever recorded.

​At Warner Music, I have the had the honor of running global marketing campaigns for the legends that are Joni Mitchell, Linda Ronstadt and Emmylou Harris; and the genius that is David Lynch and the Twin Peaks team.

I worked on the Los Angeles area debut of Shaun White’sAir + Style.   I write about cool art happenings for Art Nerd; I was part of the marketing team for BottleRock Napa Valley 2014; and I run started an arts non-profit, ART from the ashes, with a very dear friend.  It is the most beautiful and rewarding work I’ve ever done.

​In my spare time I do this: Cookie Route and this: Los Angeles Makers.  I spin records on my monthly radio show at KCHUNG Radio and once, in 2006, I got to cast zombies for the Gorillaz and Madonna performance at the Grammys: