Alison Becker made Larry David break at her Curb audition: on a recent Instagram post, Alison says. “I’ve always had a hard time believing in my own abilities, but this time, I walked in and thought “I’ve been improvising for 2 decades. I’m good at this.” She is good at improv—I met her when she was performing at the Upright Citizen’s Brigade Theatre in New York—and she’s good at acting–you’ve seen her as Shauna Malwae-Tweep in Parks and Recreation–and now, with her short Control, you can add that she’s good at producing as well as writing. In the dark comedy that Alison made with Kimmy Gatewood, you get a glimpse into how far one woman will go to make sure everything is just so. So, so, so sublime it is.

The first time I saw you perform was at UCB in New York. Now you’re making movies! So, tell me more. You basically did everything, well, except direct your short, “Control.”

I wrote it and produced it and I’m in it with Dignan, the dog. My friend and writing partner, Kimmy Gatewood, directed it. I pitched her this idea that I kind of had in the back of my head for years for a possible scene in this pilot. She stopped me and she was like, “That’s not a scene in this pilot, that’s a short film and you should write it.” So I kind of wrote it very quickly, like threw it together in a  couple of hours because there’s not any dialogue in the movie. The script was only three pages. It had been in my head ruminating for years; I knew all the beats of it. I sent it to her and the next day, she was like, “Okay, I’m going to direct this, I got a DP, we’re shooting next week in your apartment.” It wouldn’t have happened without Kimmy, she just made it happen and also did an amazing job directing it. Kimmy just gets shit done.

I love how dark it is, and yet still so funny.

Thank you! It is a very dark comedy about suicide. After I wrote it I sent it to a couple of friends—other than Kimmy. And they were all like, I don’t know if you should keep this ending, it’s pretty dark. And if you’re questioning it, that just makes me want to make it more. I don’t want it to be expected or anything.

How much of this short is based on your experience with depression?

Not at all (laughs).

You’re addressing some very heavy stuff. But there’s a light to it. Plus there’s the OCD aspect. And you shot it in your apartment. So considering all of this, what was that like, shooting in your home, a film you’ve envisioned?

Because it was about OCD and depression and shot in my apartment, it was very difficult for me to have people in my apartment moving stuff around. What made it so much easier was that the Director of Photography, Devin Doyle, was great. When he read the script, he was like, “Oh this is me, your brain operates the same way my brain operates.” He understood that I’m very weird about people in my house. There’s a shot where I’m laying in bed and he has to get above me with the camera. We were standing in my bedroom and he took his shoes off and then he looked at me and stopped and he goes, “Permission to stand on your bed?” It made me so happy because he gets it.

This is a very Inside-Moviemaking question, but I just have to talk budget. Often, a filmmaker raises her own capital. How did you do it?

We spent $1000 out of pocket. We didn’t pay anyone and we had to buy some props and stuff. We borrowed equipment. After we finished, we were like, okay so this is looking good, so we should raise some money so we can first of all, retroactively pay people and also hire a good sound person and a good color person and get it into festivals. We did a Seed and Spark campaign, which I have never heard about; it’s specifically for filmmakers, like a Kickstarter crowdsourcing/fundraising platform. They do such a great job tailoring it towards filmmakers. And we exceeded our goals so now we have money to send it to more festivals—which I’m now learning about the festival circuit, this whole other world.

How many festivals have you submitted “Control” to thus far?

That’s a good question. I’m going to guess 30 but I don’t know if that’s an accurate number. Palm Springs was a really good one; that’s where we premiered.

What does it mean to premiere at a festival?

So if I were to make a short, what would you recommend I do, something that’s not totally obvious, like just do it?

I would recommend to anyone to get business cards. Also go to the panels and stuff because that’s where you meet people who are going to get you into other festivals.

Alison, after producing this, do you see yourself moving into directing?

I did not direct this, Kimmy directed this. It’s funny more and more people are asking me that question. I haven’t ever considered it but now recently I am thinking about it. I will say I have just gotten into producing. I produced this film but also I produced a pilot last year and the year before that I produced another web thing. I like having control over everything and seeing the vision come to life. I’m just in awe of directors.

I’m so excited for you.

Thank you. It’s pretty dark but it’s also funny. That’s what was cool about screening a dark comedy too—about such an intense topic—is that in the theatre people are laughing but then they stop themselves from laughing. Am I allowed to laugh at this? We talked about it in the Q & A after the screening. You’re kind of questioning whether you’re allowed to laugh but that’s part of the appeal of the movie, that it kind of toys with your emotions. 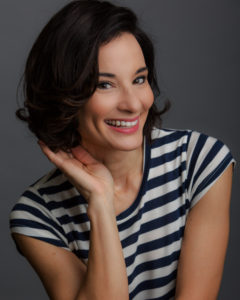 You can find out more about what Alison is up to at her website, here.

And where Control is playing, here.