I’ve been out of sorts all week for one reason: today’s my Dad’s birthday. He would have been 78 years old. So instead of writing about how much I miss him, I’m re-sharing this piece I wrote about him, a moment that happened on the day I gave birth to my daughter. Have a nice weekend. xo 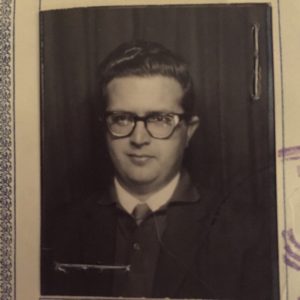 At about 10.02am my father arrives; his granddaughter is now all of 19 minutes old. Please note, my father is 60 and terribly debilitated by heart disease, diabetes and depression. If you were to look at him, you’d think he is 80 years old. I know I will hear this tale for years to come, that when he called me and reached The Inseminator instead, he was told I was in labor, and so my Dad went into autopilot. He was already dressed in his usual ensemble—loose fitting button down cotton plaid shirt, pocket filled with pens, khaki Bermuda shorts, pulled up tube socks, heavy set black shoes and his deep brown wooden cane. He walked 10 blocks to the bus stop, took the Q65 bus up Jewel Ave to the Forest Hills train station, got on the N train, took it to 57th and 7th, and walked 3 avenues west and 3 blocks North to the hospital. By the time—two and a half hours later—he walked into my hospital room, proudly with his cane, he was drenched in perspiration. As you do on a hot August morning in New York City.

Also, my Dad sneaks in. He doesn’t announce himself to the nurses. He doesn’t make a fuss. He is an  aficionado of hospital protocol; he’s been in and out of hospital beds now for almost ten years. He knows that if he asks where I am, he will be told I am not able to see visitors at the moment. So, he quietly walks the floor until he sees my name on the door. And by the way, my door is closed so that I can rest, as one does when one’s just had a baby.

“Mahhhce?” He asks as he approaches me and Ruby, she napping on my bosom, me watching her. The Inseminator is no longer in the room, he’s gone home to get “a few things.” Probably a nap is what he’s getting. My blood pressure is off the Richter scale, and the nurses—different ones that I have seen or met thus far—have been in and out of my room, watching the monitor, mouths in frowns, not succeeding in stabilizing me. I don’t know what any of that means long term. I am with my child, blissed out.

I look up, and see my Dad. I’m emotional, in a way I’ve never experienced. This joy I feel is a foreign wave of unknown pleasures. I am so happy my Dad is here. “Hey Dad. Come meet your granddaughter.”

“You good, Mahhhce?” My Dad is a Queens man; his accent requires he drops his R’s.

“Would you like to hold her?” Dad, unlike me, is naturally emotional; it is no surprise to me that he starts to cry as he stands over us. In the wake of my father’s illness, I’ve learned to be gentle with him; he’s become exquisitely sensitive. In re-learning how to negotiate the emotional terrain that is part of my Dad-As-He-Is-Now, I have in effect, been in training for the endless patience a parent learns to adapt to in dealing with children. Or so I believe.

Dad wipes his eyes. “You mean, I get to hold your granddaughter before your mother? Hee hee, she’s going to be pissed.” My Dad is the only human I know who employs the verbiage “Hee Hee.”

I sit up and hand Ruby over to my Dad. He’s a man who knows how to hold a baby, particularly one that is less than an hour old. He held me and my brother Jerry when we were born, and throughout our lives. And then it hits me. That’s right, my mom isn’t with him.

“Where’s mom, Dad?” I ask him as he walks over to the lounge chair and gingerly settles into it, his granddaughter in his arms. I note that he did not use his cane; I like to think that my daughter gave him strength, balance, and loose judgment.

“I don’t know. Work, probably.” Mom works as a caregiver for a modern orthodox family that lives in their community of Hillcrest, in Queens.

“I was in a rush, Mahhhce.” He starts to coo at the baby. And then he shrugs, still not looking at me. “She knows it’s your due date.”

I roll my eyes. She has no idea I’ve had the baby, her first granddaughter, a benchmark for my mother. Oh boy, my mom is very much going to be pissed that she is not here, with my Dad, right now. I flip open my phone, dial her work number. These cel phones are so convenient for reaching people.

“Mah-celle! ” Another Queens native who drops her “R”‘s, my mother is. “When are you going to the hospital?”

“Well. Mom, I’m here. The baby is here too.” I haven’t told anyone what I was planning to name the baby, other than The inseminator. I discovered very quickly when I first started toying with a baby’s first name that everyone has an opinion on what you ought to name your baby. So I did the obvious thing, I stopped thinking about a name. I didn’t want to get caught in a lie or a truth; I didn’t want to hear anyone’s opinion. I waited for the Inseminator to arrive from Australia and assist in choosing a name for my baby girl, which we did, just two days ago. We opened the Baby Naming Book that my friends created for me at my baby shower, chose a name, and we’ve kept it to ourselves. Until today. Considering we had to place her name of the birth certificate. “We’ve name her Ruby.”

“Why didn’t you call me when you were going to the hospital.”

“I didn’t realize I was in labor, Mom. We didn’t even bring a camera.”

“Why didn’t you tell me you had the baby?”

“I have to go pick up your father…”

“WHAT?” And other bon mots spill out of my mother. We’re not on the phone for much longer. She’s on her way. I feel a huge sigh of relief that she is coming. I want my Daddy and my Mommy.

“Yeah, Dad, she’s not happy.” A nurse makes an appearance, interrupting My-Mom Gate. She checks my blood pressure and tsks.

My father is a friendly man. He mentions to the nurse that he has very high blood pressure and maybe what she is seeing is just the business of lineage. She patiently poo-poos him, and leaves the hospital room.

And then: “You know, Mahhhce, those Suffragists were really onto something.”

Huh? My Dad, in his prime, was the smartest man I’d ever known. And that is, I know, a loaded statement knowing how many intelligent brilliant people are out here in the world. My Dad is my hero. As a child, his mother—my grandmother Leah Mandlebaum—smuggled her four sons out of Chelm, Poland during The War; for some years they lived in Cyprus in an internment camp, before they were liberated and moved to Haifa, Israel. She lost a son along the way, as well. My grandmother, to my memory, was a proud woman, with steely blue eyes and a fierce tongue; she was a tough broad. She had to be. She was a survivor. She left for America in the 50’s, moving to the Bronx with her husband Boris Mandlebaum. She got her husband working as a driver, saving the money earned for when she would bring her sons over. My Uncle Moshe came to America in the early 60’s, with his wife Rivka and his toddler daughter Pnina. He got work doing odds and ends, eventually becoming a successful taxi driver. My father moved to America with his new bride, my mother Shula, in 1963. He got work in the diamond district, giving it up when my brother Jerry was born in 1968. He became, like his older brother and his step father, a taxi driver. In 1969, we moved to Corona Queens, my parents purchased their first bit of the American dream, a three family home. We lived on the second floor. When the neighborhood started “changing” my parents bought a one family home in Hillcrest Queens. It would be in this home where my father’s health issues began to manifest themselves, the nightmare beginning when I was 30 years old, and I was with my mother in Italy on a little vacation; my father suffered the first of what would become an endless stream of strokes. It was 1994. In the years since he’s been crippled by this heart disease; it’s rendered him blind in one eye, reliant on a walker. My father was a voracious reader of books; to lose his eye sight has been as emotionally catastrophic for him as having to be on disability, never to drive ever again. His identity was wrapped in his ability to drive his taxi—he owned his medallion—as well as his ability to provide financially for his family. The downward spiral of his health has been taxing on him, obviously, and I’ve  had a backseat view to it. Right now however, the frail man I’ve watched lay in countless hospital beds has been replaced by the proud grandpapa and for that, I’m grateful.

Still. What is he talking about?

“They put those Abolitionists to shame.”

“Well Dad, they all were working for a just cause.”

“But you know, Mahhhce, those women, they should have started a little earlier. Why did they wait for the men to kick things off?”

“What are you talking about Dad? Are you wanting to debate who came first, the Suffragists or the Abolitionists? I mean if you want to get granular, and look at the date of which movement really kicked things off, I’m certain…”

“Mahhhce, I’m just saying really, maybe, they were the first to recognize the injustice….”

My dad and I begin talking over one another, debating the work of the Abolitionists and the Suffragists and who came first, when a nurse comes rushing back into my room. Why is she back again? This is so our happy place.

“What is going on in here?” She is flustered and unhappy as she checks my blood pressure. She frowns. All of these nurses having been doing that all hour long. “Your blood pressure is UP, Ms. Karp.” She looks at my Dad. He shrugs.

“Don’t look at me. My daughter, the genius, thinks she knows everything about feminist history.”

The nurse looks at me. “This is your father?”

She softens immediately, speaking now in a gentle voice. “Mr. Karp? Do you mind if we let your daughter rest for a little while? She just gave birth to your beautiful granddaughter. I’ll find you a comfortable place to sit.”

“Can I take my granddaughter with me?”

The nurse smiles, not patiently, but genuinely. She probably gets that my dad, isn’t a pest, he is just in love with his girls. “No sir, the baby needs her Mommy.” The nurse brings Ruby back to me, and  helps place the baby’s mouth on my nipple. This is what they call latching on. Her suckling feels like a highly powerful vacuum cleaner; no man has ever been this powerful a sucker. Thankfully, there is nothing sensual about Ruby at it, just necessary; I’m sustaining my child with my big American breasts.

Then the nurse helps my Dad stand up, and she escorts him out of the room. Slowly, of course.

My dad, after all, walks proudly with a cane.