Another balmy Wednesday, and already the day is endless. If you haven’t pre-ordered Ruby Karp’s Earth Hates Me yet, do so now. The pre-sales figures go a long way. Thank you! 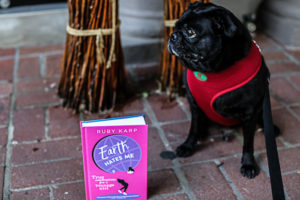 Puerto Rico needs your donations. Please help. Dana Marlowe of Support the Girls is taking donations. As are Chris and Carla Sloan. There is also the Maria Fund.

Saying yes, as per Shonda Rhimes.

Trevor Noah: “I had this skewed idea of feminist: I thought it meant being a woman who hates men. When I read Chimamanda Ngozi Adichie’s We Should All Be Feminists, I was like, ‘Oh, this is what my mom taught me. This is simple. I don’t understand why everybody is not this.’”

Susan Collins, a Republican who stood up for Health Care. And women.

Also, a Freaks and Geeks documentary.

Saudi women have the right to drive. One small step…

When the condom gets lost inside your body.

Can you child go to college for free?

Want a beautiful button of RBG? Patti Smith? Michelle Obama? Diana Kane has them, as designed by Jenny Belin.

Are you a writer and looking to go somewhere to do so?

And now have a laugh with Larry David and Seth Meyers.

Puerto Rico has been devastated by the recent hurricanes. Your help is needed.

The Maria Fund. “One hundred percent of monies raised will be used to support immediate relief, recovery, and equitable rebuilding in Puerto Rico for the communities hit hardest by the storm.”

Operation Puerto Rico Care-Lift: “The island has been devastated by two back to back Hurricanes in two weeks and has lost 100 percent of its power grid. This disaster happens on the heals of over 10 years of severe economic recession and hardship. And frankly, most people don’t have a way off this Island.” Lara Richardson & Chris Sloan

Support The Girls: Always an advocate for women in need, Dana Marlowe’s set up a donation for Puerto Rican women and girls.

Unidos. “100% of your gift to UNIDOS goes to help children, friends and families recover from the devastation caused by Hurricane Maria and the Mexico City earthquake.”

Unidos Por Aguadilla.  “That’s why we concerned about our towns of Aguadilla and Yauco , where we were born and raised, are creating this fund to funnel 100% of the resources directly to help  the families in need on the West coast of Puerto Rico. ” (Samy Nemir & Hedmanuel Soto)