1. You were my political science professor in undergrad who used to join me for coffee in the Student Union Building before class. You asked for my phone number and then called my house to ask me out on a date. I told you that I wasn’t comfortable with the fact that you were my teacher and that I hoped it wouldn’t affect my grade. You never talked to me again. I earned an A.

2. You were a network executive who sat in a screening and ogled the daughter of one of our main characters in the show. She was a blond young woman wearing a tank top, and even though she had nothing to do with the story, you joked about how she should get more screen time, especially from the waist up.

3. You were a government employee where I was an intern. You said lascivious things about me to the woman who shared the office. She laughed and said, “cut it out, she’s jailbait!” You said, “jail would be worth it.” 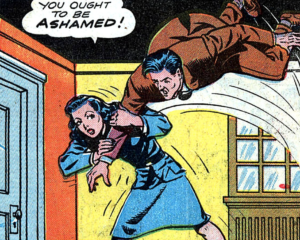 5. You were an executive at a prominent commercial production company seated next to me at the client dinner on the night before an intense and complicated shoot. You leaned in and whispered, “You may be a saint in the office, but I bet you f*ck like a whore in the bedroom.” I told the director, a personal friend, and he felt bad. I told the producer, and she said, “That’s just B being B. I give it right back to him.” I told the office manager because there was no HR department. She apologized on behalf of the company, and you continued to work there for years. You now are the CEO of your own production company.

6. You were a presidential candidate who referred to women as a “piece of ass” and bragged about walking in on women while they are changing in the dressing room, about how when you’re a star you can do anything like “grab them by the pussy.” You think “putting a woman to work is a dangerous thing.” You said breastfeeding is “disgusting.” You called a woman journalist a “dog.” You instigated a campaign of international humiliation of a candidate who was far more qualified than you, and you called her a “nasty woman.” You are not my president, and I am not alone.

Kathryn O’Kane is a director and producer with over fifteen years of diverse experience in television, advertising, and web media. www.busyk.com