I was in high school, circa the early ’80s, when I first heard “Los Angeles” by X on the only radio station that mattered to me, WLIR. Exene Cervenka’s voice, a harmonious rally, was a wake-up call. I was a fan. Later, when I was doing BUST, Exene was doing other things, beyond X. Poetry. Speaking up and out. An example to those of us Third Wave Feminists to keep pushing ourselves. In the years since, she has remained outspoken, and so prolific. 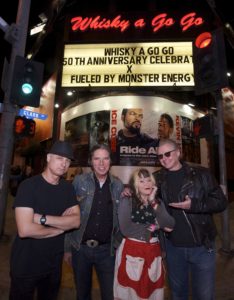 We spoke in the wake of the Harvey-Weinstein-but-before-Kevin-Spacey news broke. I deliberately stayed away from so many of the familiar threads of her personal life, as well as the overall trajectory of X, but you can read all about either anywhere there is a search engine. The impact of her career in X though, is not to be missed, and if you are in the Los Angeles area, stop by the Grammy Museum for the X: 40 YEARS OF PUNK IN LOS ANGELES exhibit, which is a celebration of the band she is and has been a part of for the last four decades. It will be up through March 2018.

X will be playing a whole bunch of West Coast dates through the holidays. Go see them play live. Dates are here. Do it. And through November 26, visit the Palos Verdes Art Center / Beverly G. Alpay Center for Arts Education for Exene’s art exhibit: EXENE CERVENKA: LIPSTICK SUNSET. I can not tell you how excited I am to speak to you.

So I’m calling you while you’re at work.

Well, I work for a friend of mine when I’m not on the road, just trying to fill in the gap so I don’t end up with no money. I toured a lot this year, we did a lot of work and we did a big Kickstarter thing that was very successful to put out a live recording. It’s always juggling. My insurance is going to go up again in November so I have to kind of keep everything going. It’s like for everybody else; we just kind of adapt to every year. You’re just trying to stay a little bit ahead of the curve.

The Grammy Museum’s Exhibition celebrating your band is a remarkable gallery of your work. It must be amazing to see your body of work, collected in one space.

Oh it’s very cool. We worked very hard with the museum people. They did such an excellent job. It’s so like how we would have done it. I’m really happy with the graphics and the choice of what they put in there. We had lots of photographs. There’s stuff you have to pick through. You can’t put everything in there but they did a really good job of listening to us and also having really good sensibilities. I hope people will come out and see it if they’re here in LA. Music, it’s stuff we have in our lives. We never really stopped playing. We lived this all the time, being in X. John and I, we did a ton of interviews and personal appearances. We got a proclamation from the city. We did a press tour of the exhibit. Everybody was so happy this was happening. We played the night it opened on the roof. You celebrate those moments because they’re rare in life. It’s such a wonderful selfless shared feeling—we’re still here—one of the highlights of our career for sure. We haven’t had this good of a year ever ever ever. It’s pretty neat. 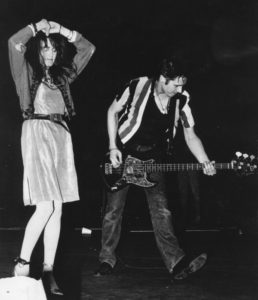 I know that for me, when I started BUST, I wasn’t thinking about the next forty years, I was reacting to what was happening at the moment, in the early 1990’s, with the state of feminism. That was my thrust. In retrospect, I know the anger was the fuel. When you arrived in Los Angeles, you were just 20. Were you like, okay, now what do I do?

I was writing kind of quirky stuff and making kind of quirky art and I just came to California to just get out of Florida. I didn’t know what was going to happen. I just figured I’d find a job, find an apartment, meet some cool people. Figure out what I was going to do when I got here. I met John pretty quick. He thought my writing lent itself to lyrics and especially since the punk thing was happening. It just kind of segued into that. It wasn’t my intention to come to California to be in a band; it just happened.

Awkward Dave Letterman in 1983 interviewing X, who go on to sing “Breathless.”

You’ve been writing for the whole of your adult life. What are you working on now?

I write all  the time. I’m actually writing fiction now so working on that. Working on a book about my Dad, which is not really about my Dad, it’s about a lot of things but he’s a central figure in it. It’s a lot harder than just writing something—you know, you’ve had a couple of drinks and you’re at a gig and you write something down and you put it away in a journal and then later decide, oh maybe that would be good in a song. It’s a lot more time consuming but I’m enjoying it. When you’re writing songs, it just seems like one day you’re making an album, you’re young, you’re working on stuff, everywhere you go, your brain is scanning for song inspirations and lines and ideas and images. When you’re writing fiction, you start thinking like a fiction writer, you start thinking like a story teller as opposed to a blurby kind of song. I’m always looking for the underlying causes of things. I don’t just accept anything.

I wish people would apply that to their lives, especially in raising children.

I have one son, Henry. Raising a kid is hard, raising a child well is super hard. It’s hard to do well. Parents now just stick a tablet in front of their face and that’s it. His dad is an actor so actually it worked out so amazingly. I would be on the road and his dad would be home and then he would get a movie and then I would be home. It was like he was with us almost all the time. It was tough but you know how it is, we made it work; we didn’t have family here. And you know the extended family and friends thing is very important. 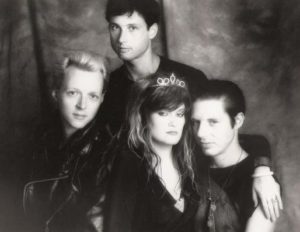 It really is. I couldn’t have raised my daughter without my friends offering to watch her here and there, help out when they could.  Because so much of the time, you’re just trying to keep up.

Yes. It’s like they’re going to figure out that I don’t belong here and that I don’t know what I’m doing. You have have this thing that everybody else is like a professional parent and I’m just this person trying so hard, just figuring it out on the fly. I know that feeling. All the women I know that have kids have felt that we’re not the standard get married to the right person everything by the book. I’m older than you; there was no birth control pill, being gay was completely illegal, black people couldn’t eat in the same restaurant or use the same water fountain. I grew up in a really small town in a rural area of Illinois so it wasn’t like I was in a city going to demonstrations or going to concerts. I was just a kid on a bike, playing in the backyard. When I grew up women were nuns and nurses and stewardesses and teachers and stuff like that. Most moms—like my mom and everyone I knew’s mom—stayed home so when women got into the job market there was a huge victory.

And now here we are, working and raising our children and pushing back.

Susan Faludi—she did Backlash—she wrote this book called Stiffed and it’s about what happened to men over time. How they used to build ships and they used to build bridges and now they’re sitting in a cubicle looking at a computer and how that makes them feel. Why do they blame women for things? Well, because they took half the jobs! We’re all just doing the best we can but it’s pretty hard.

What’s your take on what women are confronting in the workplace?

I’ve never been in that position so I don’t know what I would have done. I hope that things get better. I think we can all agree on that we just have to figure out how to do it. Let’s keep exposing these horrible people, let’s keep calling everybody out. It doesn’t matter who they are nobody is above justice at this point. I don’t care if you’re a Republican or Democrat. I don’t  care if you’re a man or a woman, young old, rich poor. Right now is the time to stand up and say NO. Nobody wants to go to the police, nobody wants to deal with the courts, nobody wants to deal with repercussions; but you just have to because if you don’t the next women gets it. You’re preventing somebody else from being abused, being victimized. If you don’t say anything, that person just does it again to someone else.