Every Monday, I bop my head along to the theme music of the Jackie and Laurie Show, the podcast that Laurie Kilmartin co-hosts with Jackie Kashian. “It’s the Jackie and Laurie show, the Jackie and Laurie show.” I love it so much. It’s so simple and uplifting, an easy introduction to a podcast hosted by these brilliant comics. Laurie Kilmartin has been a stand up since the 1980’s, and continues to do spots all over the country. She is also a writer for Conan and a best-selling author of the ultimate in parenting books, Shitty Mom. Her second book, Dead People Suck, A Guide for Survivors of the Newly Departed, is her hilarious take on dealing with loss, inspired sadly, by what she learned when her father passed away. We had a chance to talk about her book, in between sets at Stand Up NY, because of course we did; Laurie is a comic to the core.

What I love about Dead People Suck is that you approach death of a loved one/your ow/ how to deal with grief with a sense of humor, which I appreciate. You do a great job of advising people when-to-die math, as in your case, with your son, which I found hilarious and helpful.

Like life will be so much less stressful when we’re 91.

Who cares? It will be so easy. There will be driverless cars; we’ll be able to go anyplace at night because we won’t have to worry about not being able to see. I think I read that they’re trying to come up with smart contacts that can correct for both visions.

When writing about preparing for one’s own death, did you prepare for your demise?

Yeah, in fact, I just took the tub out of my bathroom so I just have a walk in shower now. I kind of miss the tub. I had fainted a couple of months ago when I was sick. I hit my head on the side of the tub. I only fell from the toilet so it wasn’t a huge fall but it was like I had this thing just standing up in  my bathroom ready to attack me—this wall of the tub—so I took it out. Also my mom lives with me so she steps over the tub everyday. That wasn’t getting any easier for her so I took it out.

What is it like having a parent live with you, as a parent yourself?

It’s very stressful. She doesn’t leave as much as I thought she would. Maybe because she moved to a new place, like a new part of the country. My Dad’s not here so everything is different. She doesn’t know where anything is, her health isn’t as good as it was two years ago. I saved a couple of her voicemails from when my dad was dying and her voice sounds so different than it does now. Now it’s really labored and it feels like every word she’s fighting in her throat to say it, so that isn’t helping. But you know, it’s your mother and she’s just down the hall.

How long has your mother been living with you?

I guess since middle of December. She couldn’t fly for Christmas. We were all going to Chicago to visit her family; she hasn’t seen them in a long time and then she couldn’t go. So it was just me and my son visiting. It was fun. If it was just going to be me and him, I would have gone somewhere else than Chicago but oh well.

You’re such a good daughter.

What do you mean?

You were by your father’s side. You’re letting your mom live with you. It’s so generous.

No, if you saw me in action with her, you wouldn’t say that. With my Dad, it was like he was just the greatest.You could bounce stuff off of him through her and stuff like that. We always kind of joked through my dad and now she takes everything as an attack so its not as fun for sure. Taking care of my mom was a actually a promise I made to my dad. I mean I wouldn’t let her be on the street or whatever but it’s still you know.

You write so eloquently about your Dad; I wonder how difficult it was for you to tap into these moments.

It was. I thought I was done and then I had to reopen all of it. I wrote this other book called Shitty Mom which is just parenting essays. And I pitched it as, Oh-It-Will-Be-Shitty-Mom-Of-Grief. Then I was like, oh this is so much harder because he’s dead. With my kid, I was writing about my kid and he’s growing so there’s a feeling of optimism and I’m just looking out at a life that’s just starting. This one, [Dead People Suck], is looking back at something that just ended; it was way harder than I thought it was going to be when I pitched it.

Throughout the book, there are helpful tips, like how the only acceptable way to give condolence is to say “I’m sorry for your loss” and how to Marie Kondo your life when you’re dying and what it’s like sorting through your parents belongings.

Yeah,  get rid of it! Going through my Dad’s stuff was like, it took so long. I still have a lot of it. There’s things I look at —where before I was like, Oh dad— and now I look at it and it doesn’t evoke as much as it did before. I can let it go if I want to. 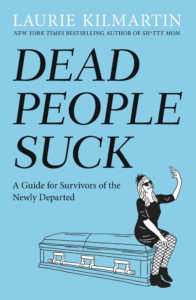 Your stand up is so present in your books. Tonight, I’m meeting you in between sets, and you have five spots tonight.

I just want to do standup. So I will always agree to a spot. I got tired at 6pm. My body clock is all off. I’m used to performing exhausted. I’ll probably hang out at the bar and go on Twitter and talk with some comics if I know anyone.

How long have you been doing stand up?

Since 1987. In the Blazer, driving all over the country.

Ah, the era of shoulder pads.

I actually at that time had pretty wide shoulders from swimming so I didn’t pads.

I so associate Rita Rudner with those pads, so coiffed and fashionable.

I think her generation of comic dressed up a little more. We’re a little sloppier. It’s just more of this is what I feel like wearing

How long have you and Jackie Kashian been doing the podcast?

We just did over 100 so maybe we started two years ago right around now.

I love how as you’re getting towards the end of the show, one of you does a time check.

Maybe it’s a comic thing. It feels like we should do an hour, no more no less. Sometimes it’s like, ugh I’m done, I don’t have anything left, let’s see if we can find something else.

What are you doing after you finish working tonight?

I like to sit on my bed and be just alone. Gloriously alone. A friend of mine read the article about Aziz and was like that’s marriage. Everytime I’m in a relationship, I end up at that point where I want to be alone. I make myself remember how badly I want to be alone. So when I’m alone, I’m not, why don’t I have a boyfriend. I can be like, oh yeah remember how badly you wanted to be by yourself and you’re with this guy.

Do you identify as a feminist?

Yeah, but I don’t even know who wouldn’t? It just doesn’t make any sense to deny rights to yourself. I’m around more women now so it feels more community based because I was on the road by myself for so long, I was just fighting for my life so I didn’t feel like I was part of anything. I think the stuff in the last couple of years has made me feel more connected to women. I felt I was different from most of them because I was a comedian. And then when I was a comedian, I’m with only guys. I just felt like I was the only one just like me so I feel less like that now. 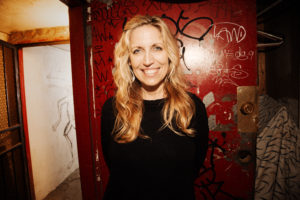 Listen to The Jackie and Laurie Show!