She is the author of over 30 books, which includes the following series: The Clique. Alphas. Monster High. Pretenders. Yes, all of those series come from the prolific mind of Lisi Harrison, whose first adult novel, Dirty Book Club, is being released on paperback as I type. Pick it up/order it today! I was thrilled to speak to Lisi about “The Dirty Book Club” as well as all the other saucy books she and her very own book club read like, “How To Make Love Like a Porn Star,” “Lolita,” “The Sleeping Beauty Trilogy by Ann Rice” and more; is it getting hot in here? Oh yes, yes it is.

How are you doing today?

I’m feeling much better. Stella’s getting her groove back a little bit; it was five years of no groove and now there’s a little bit of a groove coming back to the point where I should probably check that reference and update it. The divorce plus knee plus trying to write a book while doing all of that—it was just a dark five years. But, the knee’s getting better and I can wear shoes again go up and down stairs. That feels like a gift. Things are good.

Ack. Dirty Book Club. That’s where my brain is, Martini-ville.

That’s fucking hilarious. It’s going to be the sequel. It will be really good for sales.

Your success as an author came before publishers relied so heavily on the metrics of a following. In promoting your first adult title, what have you learned about this market that is different than the YA market?

When I started writing, publishers really did a lot to promote the book (or maybe I just got lucky). They were really involved. And then, social  media  came and they’ve put it on us. It’s two totally different skills. It’s really hard to break out beyond that for somebody who that’s not their full time job. And it’s a very different audience. Everybody thought, oh of course you’re going to have this natural built in audience and they’re exactly the right  age to read this now. And that’s true but they’re not spending 25 dollars to read this book: they’re in their 20s, they’re in college or just graduating college—that’s a big ask. Hopefully, there will be more of a surge when the paper back comes out and that’s when people can afford to buy it.

When was your first book published? What was going on in your life then?

[“The Clique”] came out, I want to say 2003. I finished the third one and I was supposed to have my kid in two weeks and I hadn’t done a single thing to prepare for the kid. I was just like let me get my deadline done and then I’ll deal with the baby thing. The day after I turned in the book, I had to be induced. 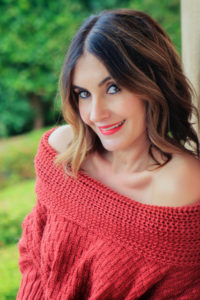 “The Clique” has had a huge impact on the YA market. My daughter and all her friends read it, in their middle school years. Was it a surprise to you, for it to click in such a blockbuster way?

It was surprising and cool and weird. I remember getting fan mail which was real—letters with paper on pen! I remember getting a manicure somewhere in New York and taking my four fan letters. I was like I will write back to every girl that ever writes me. For a while I did but then it got overwhelming. The fact that it got overwhelming was crazy. I have bins of letters. It’s so trippy. It’s also hard because you come out with something that’s not as successful and it’s like what? And it’s just a weird thing when the first thing you do is successful, it’s hard to learn to lower your expectations after that.

So you write all these middle years book and you decide to write one about women, why?

Famous last words! What was so challenging about writing an adult market novel?

First of all, just figuring out why this book is important. It’s about a group of girls that meet in secret and read these dirty books that are taboo. Well, it’s 2018, it’s not taboo! I could have done the older generation of women but to write solely in that generation, it’s not what I wanted to do. So, it’s just trying to find a way to make the messages of this book matter. I started off by thinking it was about the secrecy of the club. Many drafts later, it was the power of female friendship. So you have that realization and you completely switch gears. It was also finding my voice as an adult writer which is very different, I’ve learned. Adult writing is not as much fun! I have a lot of fun writing for middle grade. I don’t get to make up words and laugh at people doing stupid embarrassing things. Also, the expectation to write sex was pretty high. “Fifty Shades of Gray” had just come out. I tried to write sex and I could not do it. I will talk about sex all day long openly and honestly but to write it it was very very impossible for me. I wrote the word nipples and I was like, “I can’t, I can’t, I can’t!” Delay, delay! So how  do I write a book about girls reading dirty books without having to write erotica? I think I wrote the first hundred pages six different times before I nailed it. So it was tough and then going through a divorce as well! It was darkness my friend, it was darkness. 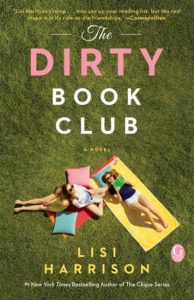 But this is how I think it became magical in a way because that’s what’s honed my writing. It gave me something to write about. During that time, I needed my friends. I had a lot more to say about relationships than I would have five years earlier. I had a lot more to say about the way people deal with each other because I was going through something that I had not experienced before that informed the writing so much more than it would have  been had I not had my life blown open, you know?

Do you think female friendships flourish inside a book club?

I think it could. I think a dirty book club would expedite that. If you’re  reading “The Wife Between Us” which I loved, you maybe argue a little bit. But if you’re talking about a book that’s purely about sex, then suddenly your conversation becomes intimate fast. Suddenly, you’re bonded, you’re talking about things that most women aren’t talking about.

How did you choose the books in the book? It’s a little meta.

It is! It’s so meta!  The premise is that the original members started the book club in the early sixties and were handing off this club to the younger women so I wanted each book to represent a different decade in the original members lives. So the first one was “Secret Housewives Handbook to Selective Promiscuity” which is one of the first dirty books out and was banned, [it was] very controversial. “Fear of Flying” which is amazing and a classic. I had to do “Fifty Shades of Gray” because how do you not? And “How To Make Love Like a Porn Star” was my favorite one that we read so I wanted to put it in the book. So there it is, that’s how I picked them.

For you and me, the zipless fuck is so iconic, for the generation behind us as well as the one in front of us.

I like that way of framing it. It’s amazing how relevant they still are and  how meaningful they still are and how feminist they still are they are period, even though they’re books that are forty or fifty years old, they’re still so on point right. I mean have you read the “Secret Housewives Handbook to Selective Promiscuity”?

You have to get it. You’ll read it in two hours. It’s powerful and amazing and brave and wildly feminist, It’s just brave, really brave.

Love and heartache, on an adult fiction scale, must have also brought its challenges.

For me, it was important that the male characters and the female characters weren’t just two dimensional. Going through the divorce and everything helped me see there are really two sides to the story. Not every guy or every girl cheats or does whatever. Look behind the actions, you’ll see the motivations and see what’s really going on there. I don’t think people are assholes. That’s sort of what fueled “The Clique” too. Why are these girls bullies? Is it because they’re born with the bully gene? No, look behind the actions and see what’s motivating them. It’s always been an interesting thing to write about for me.

You do a really good job of showing what people do to survive.

Yes and to fit in. That’s sort of a theme in every one of my books—the length that we go as a species to fit in. The way we betray ourselves to try and fit in, the courage it takes to bust out of that and just be yourself. It’s really hard. It sounds so easy to lecture somebody about but it’s incredibly hard to do for women of all ages.

The menopause book club! The characters are all named Perry!

Will you return to middle grade books?

I’m going back to middle grade! I’m writing something right now about three girls in  seventh grade that are weirdos in their own way that find each other and help each other deal with the embarrassing funny things of puberty. It is cracking me up. “Dirty Book Club” when it was done and it was finished, I sobbed like crazy. But it wasn’t my joy; middle grade is my joy. It’s so much fun because it kind of speaks to all of us. It’s just when it all begins for me. It’s such a funny time.

Each month, she will pick a new dirty book, and open it up to discussion, as well as interview the authors!

And buy the paperback of Dirty Book Club!