I have been preparing my daughter’s lunch every day of her school life, pre-K not included as she was only in school for a few hours in the afternoon. Waking up every day at 7, making breakfast (cereal, mostly, and more recently, toasted bagel with butter) and putting her lunch bag together; when she was younger, and would still hold my hand, we’d leave together, walking to school (eight blocks away), usually arriving a little late. Later, when she entered middle school and had more autonomy over her arrival time (read: never ever being late), I’d still wake up and fulfill the same breakfast/lunch routine, and instead of being harried, I’d have a leisurely moment to walk the dog or simply watch Pat Kiernan read the headlines of the day on NY1. During my daughter’s elementary school years, she had personality-suited lunch boxes that I would hand wash every night as often she wouldn’t eat all the carrots I’d pack, and they’d come home, after a long day of education plus after school, smelling like fart. I packed, usually, a peanut butter sandwich, crust cut off. In middle school, the crust was allowed to stay on. In high school, kaiser rolls became the preferred bread, and if I wanted to be creative, I’d make a sliced turkey with cheddar sandwich. The fall back was always peanut butter, no jam. Often at night, after she’d fallen asleep, I’d go into her backpack, and clean out the day’s lunch bag. By high school, there was a shift from the cutesy to the generic, brown paper lunch bags I purchased at Duane Reade. Not as economic, but more of her time. The other discernible shift were the add-ons: in ninth grade, she ate apples, the carrots no longer in favor. Never one for bananas, always game for tangerines. Stone fruit always returned unbitten. As she navigated her way through high school’s quarrels, her tastes shifted, and I kept up with them, wanting, so desperately, for my daughter to have snacks and a meal throughout her very long and stressful day, the day that began at 8am and ended at 4:15pm. Water was her beverage. Some years, there was an eco-friendly water bottle, other years, an environmentalist’s nightmare, plastic (Dasani, preferred brand). Other staples: the chocolate croissant from Zabar’s as they made a delicious treat that did not flake, ergo not messy. If I put a See’s Nut and Chew candy bar in there, she would sometimes text me the empty wrapper, to let me know I’d done good. Other rejects: popcorn, mixed nuts, raisins, and any sandwich with tomato in it. In her senior year, I became fond of going to my neighborhood shoppes—Citarella, Fairways, Zabar’s—on a daily basis and giving her a prepared sandwich: roast beef, corned beef, pastrami, turkey. All hits. I liked my small contribution to her largely consuming day. High school, as she has said, is petty and boring. I felt that having that loving touch from your mom, even if slightly disappointing offers of carrots and grapes are included, could be a comfort zone for her. I didn’t consider giving her the task, particularly once she entered high school; what would be left for me to do, after all, having raised such an independent person, better for me to have some part in her day, other than shouting out “I love you, make good choices, text me when you get to school!” And so I prepped the lunch. I didn’t make creative bento boxes or bake things myself (well, except for her elementary school years, when I did bake cupcakes and muffins and other goodies on a weekly basis, when I used my kitchen for something other than storing old tax returns), but I did think about her daily selection, and I crafted it to be something she had available to her for when she got hungry. Today is her last day of high school, and so tomorrow, I’ll sleep in, not needing to wake up at 7 to prepare her brown paper bag lunch, for the first time since the day before she began kindergarten.

An essential read, a treatise on suicide, those of us vulnerable to being left bereft by the hopelessness someone we love feels. “There were close to forty-five thousand deaths from suicide in the United States in 2016 alone.” Yes. 45,000. It’s not just the beloved celebrities; it’s all of us, lost. Not necessarily suffering from depression, but despair, a last-ditch desperate ate. Those susceptible? Those of us in our 50’s and 60’s, no longer shiny and new, not able to find gainful employment, our finances in freefall. This frightened me as well, how “A third of Americans are sleep-deprived, and sleep deprivation has a devastating effect on mental health.” How do you train your body to sleep, when you’re body is in its final transition, that deliriously karmic moment of menopause, where sleep disruption is a hallmark? “…some ninety per cent of those who attempt with a firearm are successful in ending their own lives. Suicide is often impulsive, and, if the means do not spring to hand, the impulse passes and people go on to good lives.” 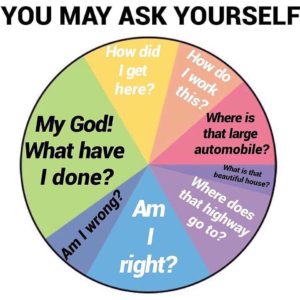 Dr. Mona Hanna: “Lead is a neurotoxin that can cause irreversible damage to the brain. There is no safe level. And yet kids and pregnant women were drinking the water. Babies were being fed formula that was mixed with the water. Mac and cheese was being made with the water.”

Michelle Wolf: : “The one thing people need to be very careful of is, if you’re watching a comedian at a club or a show, you don’t know how new that material is for them so you can’t judge them off of that because they’re probably still working on that joke.”

Wedding vows to die for!

And now have a laugh with Ellie Kemper.