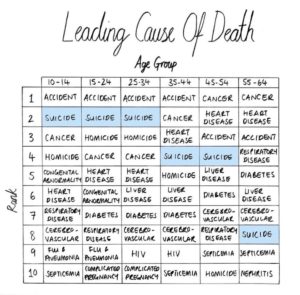 Leading Cause of death by Mona Chalabi

The suicides of Anthony Bourdain and Kate Spade last week triggered so much within. Coming on the eve of one close to me, when my best friend, Wendy Bott, took her life on June 12, 2001. I so appreciated this essential read, a treatise on suicide, bursting with facts: “There were close to forty-five thousand deaths from suicide in the United States in 2016 alone.” Yes. 45,000. It’s not just the beloved celebrities; it’s all of us, lost. Depression, despair, a last-ditch desperate act. Those susceptible? Those of us in our 50’s and 60’s, no longer shiny and new, not able to find gainful employment, our finances in free fall. This frightened me as well, how “A third of Americans are sleep-deprived, and sleep deprivation has a devastating effect on mental health.” How do you train your body to sleep, when you’re body is in its final transition, that deliriously karmic moment of menopause, where sleep disruption is a hallmark? “…some ninety per cent of those who attempt with a firearm are successful in ending their own lives. Suicide is often impulsive, and, if the means do not spring to hand, the impulse passes and people go on to good lives.” Impulsive. That word, so frightening to me. So much of the darkness is. I am grateful to all the sharing, the outpouring of revelations by journalists, experts, bloggers, friends on social media, medium. I am reading them all. I see you. And I’m listening.