Tis the season of the end of school year. For my family, it’s not simply the end of the school year, but the end of high school. And with the finality of that comes the pomp and circumstance, the tropes of high school that remain with us for the rest of our lives. Prom being one of those iconic moments. I didn’t have prom; I went to Yeshiva. Much like touring colleges last year, this was a first time event for me, ever the observer in The Teenager’s life. I wanted for my daughter to have the best possible experience leading up to prom she could have. “The Best” being a relative term as I could not afford a high end gown, or a brand new pair of stilettos. Even the ticket to prom was out of budget for me at a whopping $225 dollars; that was the price of admission. Factor in taxis and corsages and the after prom party, and this whole night starts to feel out of my “best” scenario comfort zone. I needed to manage expectations from the outset. After a withering side eye at the mention of raiding my closet, I gave a budget for the dress. She knew she wanted a gown. (I gulped at the word “gown.” Visions of inflated dollars haunted me.) For months, she obsessively scoured the internet: Anthropologie, Bloomingdales, even Urban Outfitters. She spent weekends going to sections of the city that featured shopper’s delights: Soho, Upper East Side, the Flatiron. Sending mirror selfies of every dress she tried on. Not finding one that worked for her body or her budget or her taste. Coming home frustrated at the lack of selection. I suggested we go to Saks, which upon hearing that word, she recoiled, claiming it was way out of budget. But the great secret of Saks is that there are heavily discounted items; you just have to spend the time unearthing them, the way my Mom used to scour the racks of Loehmann’s and Marshall’s, knowing there was an under-ten dollar item that was a must have. The Teenager was skeptical. I was confident. On a windy spring Sunday, we took the 1 train to 50th street, and walked the few blocks cross town to Fifth Avenue. There she stood, that glorious bastion of wealth and also, sales. Gowns beckoning. We entered an elevator packed with Vuitton entrenched women, their zhuge’d up lips and Celine sunglasses adorning my adventure. It seemed we were all going gown shopping; everyone got off at the same floor. I followed The Teenager, her eyes still skeptical that this would be where we’d find that right dress. I spotted a breathtaking peach Marchesa; it would look divine on my daughter’s alabaster skin. Unable to resist, I looked at the price tag: $750.00. Out of budget. Panic setting in. Did I overshoot here? I steeled myself to weather her disappointment. Imagine my delight when I heard an excited level of “Mom” spring forth from her lips as she leapt at one gown after another in the sale section. Oh my it was a blur of taffeta and tulle. Heavily brocade bodices. Pouffy skirts. Oodles and oodles of fabric, all designed to make a woman feel like Princess Di for one night only. Dresses longer than my whole body were thrown into my arms,  heavy despite my burly batwings doing overtime; I called for a dressing room. Into one we were whisked by the harried women on the floor, tending to one demanding potential customer after another. I sat on a bench in this private chamber (well, yes, the dressing rooms at Saks are a bit lush) while admiring one dress after another as it fell onto The Teenager’s body. Emotional. Other things too. I didn’t have this moment with my Mother; we went to Alexander’s on 63rd drive and bought a polyester burgundy halter dress for $16.99 for my Sweet Sixteen. We were a family of four living on a salary of a taxi driver and a cashier. We were not allowed the luxury of frivolous spend. I’d been working as a baby sitter since I was twelve years old, using those precious dollars to buy jeweled barrettes at Bloomingdales, things my parents could not afford. As I sat on that bench, I thought of how long those days were for my father, of the rudeness of his passengers, of how primed he was for being at home after a day driving assholes around the city. How he would be so proud of this moment, of watching his daughter and his granddaughter have this, this time. “What do you think?” The Teenager asked, six gowns later. She’d chosen. Exquisitely so. Within budget as well. A gown by Basic Black Label. It had everything: sleeveless, form-fitting bodice, intricate floral design, gown length skirt. I suspect when she envisioned her dress, this was in that fantasy. Flattering. Pops of pink. Completely suited to her. The Teenager as she flowed in her dress? Priceless. 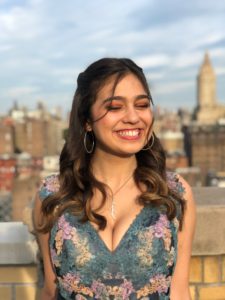 The families. Oh, these families. It’s so heartbreaking. Watching that fucking ferret quote the bible while claiming policy is infuriating.

Laura Bush: “I live in a border state. I appreciate the need to enforce and protect our international boundaries, but this zero-tolerance policy is cruel. It is immoral. And it breaks my heart.”

Anita L. Allen: “People get discouraged when they fail repeatedly at efforts to achieve a goal. I would like to know if this is happening to women trying to get training and jobs in philosophy. If they are failing, why are they failing? I suspect women are not being discouraged by patterns of personal failure, as much as by a lack of apparent opportunity.”

If you’re a dog lover, you get it.

And now have a laugh with Nikki Glaser.