Friday. I’ve been back for a week now, from the beach. And the week, it’s been a whirlwind. I’m trying to figure out how to deal with the impending hurricane that is college, The Teenager is still at my besties in Paris, and the heat, oh, the heat is on.

I’m reposting this, an entry from last year; Shopsin’s, the restaurant, evokes summer to me. Enjoy.

For most of the 90’s, I ate at least one meal a day at a restaurant called Shopsin’s. I lived on Morton Street, a sleepy West Village street, where it was rumored that John Belushi once lived. In fact, the apartment I moved into was a hand-me-down from Jon Stewart; he’d recently gotten a gig on a show called Short Attention Span Theatre and had upgraded his living quarters to the more upscale Printing House around the corner. But Jon was not yet famous. He was my friend, a stand up, and subletting his place from a former Shopsin’s regular, and now, I too, would be subletting it. I wandered into The Store, as it was called by the family, the regulars, those in the know, on the second day of living in my Morton Street apartment and fell in love with the world that was Shopsin’s: a former grocery store that was now a restaurant, with an infinitely dense seven page menu, a serene waitress/owner–Eve Shopsin–, and an outspoken chef–Kenny Shopsin. Kenny employed Jose, as his short order cook, who despite Kenny’s outbursts and heavy moods, managed to stay upbeat. I suppose you had to, to manage your sanity amidst the chaos. The Shopsin’s were parents to five children, all of whom looked only like Eve, smiling open faces, alabaster complexions, each with his or her own distinct personality. The counter was filled with tchotchkes, the walls decorated with vintage lightboxes, the chairs and booths worn in by butts and backs. There were rules too: they would only sit parties of four or less (the best customer was the one who came in alone), no use of cel phones, no entry once the gate was closed. I preferred to sit in the window seat, a three top; I earned that privilege over time, but I’d still have to have a person sharing the table with me, such were the rules of The Store. Evie would often give me her opinion on my dates, the friends I brought in, like that. I was set up on a blind date with a man who I’d say is the love of my life; I’d told Evie about him, he too was a regular, although I’d never seen him there, and anytime he came to The Store (always, dinner), she’d call me at home and tell me that he was there. The one time I was at home, and got the call, I grabbed my dog, and walked by the store, spotting him in the window, this gorgeous long haired, long limbed boy I would soon call my boyfriend. Minda–one of the Shopsin twin daughters–and I became friends at some point, and when she was college aged, she came on a few road trips with me and my friends.The sons I knew from afar, they ranged in age, but mostly they were always so young, too young for me to get to know in a non-creepy way. Jose always smiled kindly at me and gave me a pair of gold earrings for my newborn daughter, wanting her to have a pair for when she got her ears pierced. And Kenny. Well, Kenny took me in. I don’t know why, I was a punk rock chick, mostly broke, doing my BUST thing. I was a finicky eater; on returning from Australia, he asked me what I ate down under. I told him about the tofu veggie scramble that I’d eat daily at any Bondi Beach cafe. Within days, he had perfected a recipe for it, and I made it onto the menu: Marcelle’s Tofu Scramble. My favorite dish was the Wild Rice Taboule though—pine nuts, wild black rice, parsley, tomatoes, other things too. Kenny would fry up a pita bread with it, or maybe he’d butter it, I have no idea, but it was the perfect texture of soft and crispy with flavor. It’s possible that got my tag too, I’m not sure. When I began publishing BUST, Evie would devour through whatever issue I brought in, so supportive she was, and then unpack it all with me. During my pregnancy, the Shopsin’s put a copy of my sonogram up in the window. Kenny and Evie knew the details of my life; they knew I’d asked my best friend Kendrick to be my birth partner, they knew my due date, they even knew who I planned to have in the delivery room. Kenny had a t-shirt made for The Inseminator with “Inseminator” emblazoned across the chest. They were my extended family, the Shopsin’s. A week or so before Evie died, she took the bus uptown to see my new apartment, on the Upper West Side. We spent the afternoon wandering around my neighborhood. She had just given up smoking, was taking up guitar. When Kenny called me, a few weeks after my day with Evie, it was on the day after she’d passed, he’d found my number on a scrap of paper in her pants. I was a regular. I was a person who was allowed to sit at the table, eat their meals, watch the Kenny and Evie show. What a time, what a time it was. 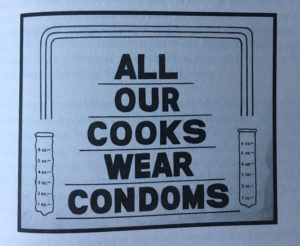 Have a moment with Amber’s Minute of Fury.

Jessica Valenti: “Though feminists have always recognized the anguish that boys face in a patriarchal system, we haven’t built the same structures of support for boys that we have for girls.”

If you’re looking for a notebook, well, here you go.

And now have a laugh with Amy Poehler.