The Teenager returns tomorrow. I have not been the model of grace and composure in her absence. It’s not so much her not-being here; it’s more, she’s overseas. Out of reach. Occasionally, out of touch. Certainly out of Find-My-Phone range. It’s unmoored me. This unconditional love I have for my child comes with a complex web of specific grandeur. I was so thrilled when she proposed this traveling adventure, even though I was terribly stressed about the financial aspect of it. I affectionately referred to it as “jap-packing,” four recently graduated-from-high-school girls, in four cities in Europe. Their trip, funded by their parents. I backpacked at The Teenager’s age, with Rhonda, who of all my friends at the time, was the only one with wanderlust (which true to her then-self, she is still). I worked, the whole of my sophomore year, at the candy counter in the student union building at the college I attended, earning minimum wage. I fit that job in between my classes, cozily. My copy of Let’s Go Europe my Google Maps. It was the only way I could do this trip, which would begin in Anzio, and snake its way through Italy, Germany, Austria, the Netherlands, France, and end up in London. We stayed in youth hostels, slept in train stations, and on occasion, a bed in someone-we-knew’s home. Wore a moneybelt, that my mother handscrafted for me.We met dozens of people along the way. Danced in clubs, music throbbing. Ate endlessly. Saw sights. I may have called my parents a handful of time. I doubt I thought about them much. That trip was so different to the one The Teenager embarked on. I am quite certain, both trips will stay with us each our lifetime. 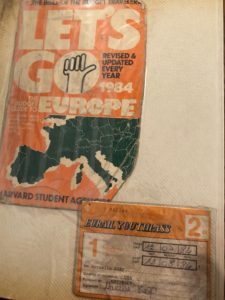 Zephyr Teachout: “Let me be clear: I will absolutely prosecute anyone who breaks the law under my jurisdiction, including ICE agents for illegal acts…ICE supporters want ICE to be above even criminal law, and that claim of radical immunity is why it needs to be abolished.”

Jessica Valenti: “Women shouldn’t have to be the canaries in the coal mines of violence and misogyny. But often we are. We burn first.”

The wisdom of Mindy Kaling.

Mary Kay is doling out mini-Coopers.

Who is smarter, you or your lighting system?

And now have a laugh with Marcella Arguello.