I was on the taxi line at JFK some years ago at the height of the Gossip Girl series and just ahead of me stood Penn Badgley, backpacked and young, ever so young, also waiting for a taxi, just like the rest of us New Yorkers. It was of course years before I fell in love with Joe Goldberg. The Joe Goldberg of Caroline Kepnes’ “You” and “Hidden Bodies.” (Read my interview with Caroline here).  Why did I love this obsessive stalker and also murderer, when I am vehemently opposed to predatory men, toxic masculinity and the general crisis of the male species? I suppose I liked his cynicism, and I related so very much to his longing, his aspiration of eternal love, and his unrelenting addiction to romance. Also, there is the suspension of reality, where I forget for a moment that there is evil in the world, that I allow myself to see the glimmer of something good in what is bad. That I gift myself fiction, and choose to chase the white rabbit as it presents itself to me.

So. When I read that Lifetime Television was premiering the series YOU based on Caroline Kepnes’ book starring Penn Badgley? Oh, it made me so happy, that this character I so enjoyed was played by this sultry everyman. Someone I could believe could truly embody this off kilter and highly intelligent sociopath.

“At the end of the day people are just really disappointing, aren’t they?” Joe reckons, four minutes into the pilot, only moments after he meets Beck, the woman he falls in love with at first sight. And becomes instantly obsessed with. He goes home after his day at work at the cool indie bookstore he works at and instantly Googles her. Within moments, he has her life told within the frames of it in the palm of his hands. He’s a good sleuth, this Joe Goldberg. Okay, not sleuth, -cyberstalker, kidnapper, killer. But still.

What Caroline Kepnes did with her two-book series was create a character that was reprehensible yes, but also, one that as a reader I became terribly invested in. The book was from his POV, his straddling the precarious line of rational and insanity, of love and obsession, of reality and hyper fantasy. And so far, in the pilot, I’m seeing glimpses of the Joe Goldberg that I got to know, and root for. Root for in that I wanted him to not be a murderous psycho. Root for in that I wanted him to have love. Root for him in that I wanted him to be better, get better. As I watched Penn Badgley standing across the street from Beck’s apartment, stalking her, stalking her in the way that predators do their best work, I shifted, finally, into rooting for him to be caught.

I will spend this series doing just that. Deliciously so. 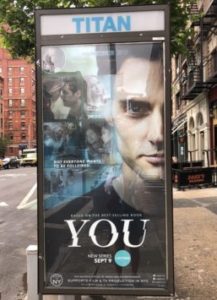 Serena Williams. If you haven’t heard, here is Rebecca Traister’s as always accurate depiction of a bullshit moment. “don’t care much about the rules of tennis that Serena Williams was accused of violating at Saturday night’s U.S. Open final. Those rules were written for a game and for players who were not supposed to look or express themselves or play the game as beautifully and passionately as either Serena Williams or the young woman who eventually beat her, 20-year-old Naomi Osaka, do. They are rules written for a sport that, until Williams and her sister came along, was dominated by white players, a sport in which white men have violated those rules in frequently spectacular fashion and rarely faced the kind of repercussions that Williams — and Osaka — did on Saturday night.”

Kamala Harris, you are our only hope.

Rachel Comey: “Finally, when I did the dinners, I thought, Oh, I can do things my way and it can work. So it gave me confidence. Do things that feel natural and it will probably come out stronger. When you’re younger, you don’t know things like this. You’re just waiting to be picked up.”

Rashida Tlaib: “here’s a new generation of leaders that are coming up the ranks that are coming from a perspective that is so much more connected now with what’s happening on the ground. Over half the members of Congress right now are millionaires. Are they dealing with class sizes of 45? Are they dealing with the fact that they can’t seem to find good-quality public-school education in their district?”

Opioid epidemic. Not a joke.

And now have a laugh with Jackie Kashian.