Amy Wilcox is a girl on the rise. Eagles, Americana, Country align in her music. Check out her new single, Somebody.

Originally I am from Arlington, Virginia. Both sides of my family are from Texas. I grew up listening to country. We were really big into two steps and line dancing and stuff. My music taste definitely kind of stems from my dad. He was a big fan of the Eagles and that kind of California country which is country but it’s a little bit more rock. I loved that kind of stuff like Jackson Brown, I love the Dixie Chicks, I love Sheryl Crowe; a lot of that stuff that is very lyric-and-melody driven but is also rocky and edgy. I love pop music. That whole pop bubble definitely had an effect on my musical background. I loved Mariah Carey, Britney Spears. I loved anything I could sing along to.

On living in Nashville.

I went to college at Vanderbilt in Nashville; I was recruited for soccer. I wasn’t super familiar with Nashville music scene, this amazing music town with live music everywhere. I was there for almost ten years including college. It definitely felt a little bit more southern but it’s such a transient city, people are from all over the world. I’ve been kind of watching Nashville grow from this southern city to now, a huge bustling town. It’s completely transformed since I was there. It’s become even more of a music hub as well as New York and LA holding its own. I just didn’t know how extensive the music business was.

On living in California.

I am a new resident of California. I was kind of splitting time between Nashville and LA.  I started coming out here and working with some new people and just trying to expand my horizons a little bit. The more I came out here, the more I was like okay I’m doing this, I’m making this move.

On the road to becoming Amy Wilcox.

I had a full scholarship to play soccer and so that kind of like took over, it was more than a full time job. I was planning on playing after college and I got injured. I had a career-ending injury my senior year. I couldn’t hardly leave the house. I started trying to get better at guitar and  trying to get better at songs.  I was like, if I don’t do it now, I won’t ever do it. Okay, all right, I’m going to go for this and see what happens. I ended up going out to Atlanta for almost a year and working in a studio down there for a pop producer. He taught me the ropes and mentored me. He knew I was more of wanting to go the country route rather than pop and he kind of sent me on my  way.  I went to Nashville and started trying to figure it out and playing open mics and meeting people and just kind of making my career one step at a time. I’d done a reality show on A&E called “Crazy Hearts of Nashville.” It was a behind-the-scenes but very dramatic look  into up-and-coming artists and songwriters and trying to show what it was really like to make it in the music business. I got signed to CAA and I was opening for a bunch of people, going on tour and everything was really, really great. Momentum was awesome. I decided to call off my engagement and things went super south; that kind of disrupted my entire existence. I kind of got distracted and wanted to take a little bit of a break. Once that settled, I started writing a lot but more consistently than I’d ever written, trying to get back into the swing of things and figure out. Having to take that break, now when I think back, I was like, now I need to really focus and really pinpoint exactly what I want the future of my career to be and like what sounds. What I want to put out into the world. I experimented all over the board and the more I did that, the more I liked original organic sounds that I had. It was a long journey to get to this new chapter.

On…wait, what, a reality show?

I was very active in the community, played a lot of shows, just trying to immerse myself in that, really trying to find my break there. There was this small  community of people and we were all very collaborative with each other. Some kind of talent agency came around and connected with people who knew what was happening in the scene. I was bar-tending at the time. Someone texted me and said hey any chance you can jump on a Skype call? You’ve been recommended for this thing. I borrowed somebody’s computer and went into the back  closet and Skyped with these people. I ended up getting chosen and several other people that were in my circle. They just decided we were all kind of hustling and we would make a good reality show.

On being on a reality show.

It’s crazy too because this is several years later that that reality show came out and I still have people connecting with me because they’re like “oooh I used to watch Crazy Hearts.” People kind of talk down on the reality shows and stuff but it really does give you an opportunity to get your name out there. It’s just what you do with that after you’ve done it. 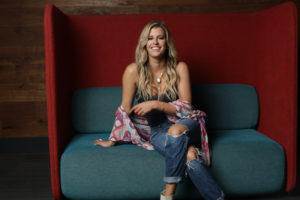