This is about Cher and my Mom. It’s a little bit about Cher, the Broadway show, also known as The Cher Show. But really, this about Cher and my Mom. Because I can’t think of Cher without thinking about watching her, every week, with my Mother, on our couch, as Cher did her stint on The Sonny & Cher show. My mother was a fan, and I was too, by osmosis, this tiny 8, 9, 10 year old. I cherished sitting with my Mom, week after week, watching Cher throw zingers at Sonny, watching Cher sing, watching Cher be awesome. I didn’t know it was scripted; I did however, love that Cher was a scamp, a camp and a bit of a tramp. She was a badass, and I gravitated towards her, what her boldness would eventually become my own vamp stamp. My mother would fill in the white space for me—”That’s her husband in real life,” “Not Jewish,” “I think she could find a better fit for her.” Sonny and Cher, as a duo, came into their fame on the hit single, “I Got You Babe” in 1965   At the time, my mom was newly married, new to motherhood, with me as her child, new to being in America (moving here from Israel just after she married my father in 1963). Motherhood was a given for my mother, being in America, more of a foreign reality. Iraqi by birth, Israeli by nationality, she spoke so little English for so long, until I came of an age, a student in the public school system of Queens, reading, writing, speaking English, fluently. Arabic and Hebrew were her natural tongue, and I, her American girl. My mother was so alone for years, a hardship for a woman who had grown up in a two bedroom apartment with 8 brothers and sisters, with whom she was so close. I was her solace, this tiny baby, even after she started to meet other women in the playground, in the building, like that. I suspect those years before my brother was born, when she was mobile with only one baby in tow, cemented her outgoing personality, being forced to initiate and forge relationships with the strangers of Queens New York. She’d sing “I Got You Babe” to me as she fed me, bathed me, all-the-things-me; it was our little song, that I was serenaded with, on a daily basis. My mother found solace in television, watching these American women (Mary Tyler Moore, Lucille Ball, Carol Burnett); I was often in the role of wing woman and interpreter, my first actual job, as an elementary school student. She sang along to Helen Reddy, to Diana Ross, to Cher. These pillars of pop culture, a conduit to language for my mother. Watching Cher on television, my mother connected with this woman with the long hair, the great costumes, the exquisite voice. “She doesn’t look happy,” my mother would say as the series entered its final year. My Mom picked up on that, from having Cher in her living room week after week. Years later, Cher would appear with Sonny on the David Letterman show. My mother called me, to make sure I’d be watching. By this point, my mother and I were no longer living together; I’d moved out of the family home, I was an adult now. But I would not pass up the chance to connect with my Mom, and Cher was our bond.

A few weeks ago, I went with my daughter to see The Cher Show. As we took our seats, the Neil Simon theatre erupted. Cher was in the house. Cher was making her way to her seat. Cher was sitting, just two rows ahead of us. This woman, who was in my parents living room, was now only a few yards away from me. If my mother had been with us, she would have pushed every human aside, to thank Cher, for saving her sanity, for allowing my mother to have a moment of respite from the loneliness, from being so far away from her own family, for having her daughter beside her. Because Cher did that for my mother, simply by being Cher.

If you get a chance, go see the play. Go bask in the wonder of this woman’s body of work—her music, her films, and of course, her choices. It’s a few hours of delight. 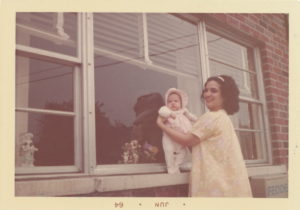 How early is too early to slip into your pajamas?

Things I would like to own and can’t afford. This denim blazer from Nili Lotan. Sigh. And now have a laugh with the women of Saturday Night Live.

cher, i got you babe, motherhood, parenting