Rocky, my dog, is now ten and a half years old, his black coat peppered with grays, particularly around his face. He is a pug; we’ve had him the whole of his life, in our family, from the time he was eight weeks old, riddled with parasites, he was mine from the moment he set eyes on me, he ran towards me, claiming me as his. My friend Steve and my mother were with me; we’d spent a day looking for a puppy, one that would be a part of our family, and we went home with this little guy. Adopting a dog was my daughter’s idea; she was nine at the time, that age where everything is an urgency, everything is so very important, everything is her word. I said yes; I’d had my beloved Izzy, a white shepherd, for seven years, until I had the baby. I allowed my parents to look after her, my constant companion, until they decided to move away; they found a warm and welcoming home for Izzy, where she lived the days of her life, happily. I’ve struggled with allowing another family to live with my pup, my inability to take care of  my baby and my other love; when Ruby pitched the idea of adding to our family, I jumped at the opportunity, my chance to raise a dog, live and love one without interference and with full physical capability. We named him Rocky, also my daughter’s idea, she wanted the rhythm of R&R. I’d have been happy to call him “Yo,” the options of saying “Yo, come here,” filling me with laughter every time I played out the scenario. We did what the experts told us to do, crate-trained him, and he took to it quickly. Over the years, there have been episodes: that time I left a box of chocolates within his reach open, he devouring them, us spending the night in the Doggie Emergency room, like that.I’d rather spend my Sunday on the couch with him, soaking up the moments we have, than do anything else. He plays well with other dogs, I’ve never seen him bare his teeth, and loves when anyone touches him. When I travel, he stresses; his urine will turn red, he’ll pee on a bed, like that, his anxiety manifesting itself. He has food aggression, will not share his bowl with another dog. He likes to cuddle with me, you, anyone, always taking the cue of a person sitting as his signal to sit with them. When I sleep, he sleeps with me, in my bed, his body buttressed against my legs and in the morning, at precisely seven, he wakes me up, time to eat, time to eat. When I moved to this current apartment, I got rid of my bed frame, hoping if I slept low to the ground, he’d be able to jump onto my bed; no such luck, the mattress plus box spring combination is still too high for him to jump on, but now, he can jump off, without causing damage to his legs, his back, as he may have with my other bed, the one so very high. In the last few months,  there have been slight shifts in his demeanor, the main one that has indicated that he’s getting old, that is worrisome to me: when I come home, I often find him nestled in his dog bed, in the bathroom, curled up, asleep. I always walk directly to him, to his spot, where usually, his head is up, he’s alert, his tail wagging, thrilled I’ve finally, finally come home to sit on the couch with him. He’ll yawn, take a long stretch, walk towards me, his whole body wagging, thrilled. Lately, though, he doesn’t hear me, he’s locked in, deep into slumber, unaware I’m staring at him, gently cooing, coaxing him to wake. He’s not hearing me when I call his name. It’s not a small gesture; he’s attuned to the world around him. So I know, I know, the aging is in effect, as it is with me, with my friends, with the world around us. Still. It unnerves me. I have his back though, and he knows that. 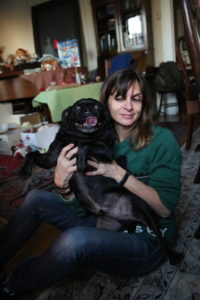 Dr. Ruth: “Women have learned they are responsible for their own orgasms.”

And a lot on Kamala Harris.

Anjelica Huston: “If I’m going to be an old lady — and I’m sort of touching old lady these days — at least I want to be a special old lady.”

Bikini Kill is on tour.

And now have a laugh with Laurie Kilmartin.