Listen. Linda Hirshman is a badass. She is a relentless advocate for women, she’s an accomplished author, she’s a lawyer. She is a matriarch, she is a friend, she is a mentor. She is a badass. And now she’s come out with “Reckoning: The Epic Battle Against Sexual Abuse and Harassment,” in which she not only documents the constant harassment of women, from Ted Kennedy to Brett Kavanaugh, but also celebrates the grit of women in the trenches, from Michelle Vinson to women on college campuses, women who have had to endure derision from peers from all sides, as they stood their ground, in the battle for their rights, personally, professionally, and as per the law. It’s a riveting chronicle, an important book, a useful guide for us all.

Enjoy Part One of my three-part interview with Linda Hirshman!

Why do you credit Alyssa Milano as your inspiration for the book?

She called me I was working on a book about abolition (I still have the contract for the abolition book) because she wanted to buy the tv rights to Sisters-in-Law. 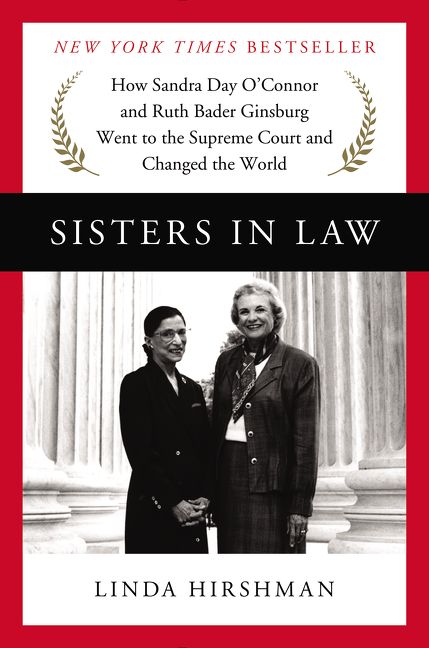 That is a fantastic title for a book about Ruth Bader Ginsburg and Sandra Day O’Connor.

Thank you! I actually thought of that title. Sometimes the publisher thinks up the title but Sisters-in-law was my idea.

So you’re on the phone with Alyssa Milano...

I don’t normally get a chance to talk to movie stars! I praised her to the skies for what she had done for the Me Too movement, for the commitment to the activism. And I thought to myself, Linda this is the book you were born to write!  The book about the history of the Me Too moment. It exactly maps on to my adult life.

And so you began Reckoning. How did you land on starting with Chappaquiddick?

I never write a book without an outline. I took several days to map out the content of my book. I did realize in the first week or two when I was outlining the book, that I would start with Chappaquiddick. First of all, it’s a very dramatic event. Secondly, I say throughout the book that I think that the Kennedy boys were a very bad influence on the role of women in society. Ted Kennedy embodies one of the most interesting conflicts in the book which is men who are politically liberal and publicly friends to women and privately harassing and abusive.

Ted Kennedy had a storied career. Do you see him as getting away with that bad behavior?

You’re a lawyer by trade. And you approach the cases with a lawyer’s eye. What I very much appreciated was that you write in a way that is digestible to those of us who have no interest in matters of law.

It is my goal to do that. I have that as my conscious goal to make what are very ancient technical concepts legible to a lay reader. I will tell  you that of all the things I have to do to write a book, hat is the hardest and the most time consuming. I rewrite those sections again and again.

In Reckoning you say, “since the ruling in Vinson, sexual harassment creating a hostile work environment is illegal.” You also say “men  can get away with an amount of sexual harassments because of the way systems are set in place.”

That’s correct. Straight white male employers in 1986 did not want to be the enforcers of the civil rights act. The decision in Meritor vs Vinson to not hold employers strictly liable then lead to the creation of all of these structures to provide the employers with a place to hide. The court said we’re going to give you a place to hide, here’s what you have to do in order to not be strictly liable (which is the legal term without fault, just liable.) And so the employers do all the things that the court lets them do to get away from it. The employer can get away from liability by having human resources departments and a bunch of other stuff that’s not meaningful then they don’t care whether they hire harassers. All they care about is whether they’re producers like Les Moonves.

You cite Catherine MacKinnon a great deal in Reckoning. You say, “The wrongdoing is in treating men as the standard for comparison in the first place. The civil rights violation is in treating women as lesser being …as per McKinnon: “help to perpetuate women’s subordinate place in the workplace and in society as a whole.”

That’s almost a direction quotation from my interview with her.

You also describe how difficult it was for MacKinnon to remain employed.

She could not get a permanent legal teaching job. She was a famous radical feminist by the time she went on the market to get a teaching job. After she started writing articles, and her books (there are several books—a theory book on sexual harassment and working women). The assholes on the white male faculties in the law schools would not give her a permanent job. They were correct to be fearful of her; she was going to change the way that they wielded their power. She has the most incisive mind of anyone I have ever interviewed.

She took umbrage with the way pregnancy was considered one of the few disabilities only women have.”

Only the disabilities that men had were meaningful to them. If you had a disability that men couldn’t have, it was invisible. It was a product of the wrong set of questions. So she changed the question: not do we treat women differently from men but do we treat women worse?

In your opinion, what would be your answer right now?

The answer right now is the same answer it was then: of course we treat women worse.There’s the current raft of abortion laws that should be unconstitutional under the Thirteenth Amendment.