The story behind this photo is such: a few years ago, Target did a collaboration with Band Of Outsiders, and they created these blue and red cashmere beanies, one said “Best” and the other said “Friends.” I bought them, hoping I could convince The Teenager, then a Tween, to enjoy the set with me, even wearing one while I wore the other. I mean, this was a fantasy, of course, as she was in middle school, the time of a person’s life when you no longer hold your Mom’s hand in public, when you walk to school on your own, when you seek your first stab at independence. When the hats arrived, I excitedly showed them to her, and before I could even utter my intention for dual side by side wearing of them, she said, “Mom. No.” That was the end of my dream; she’d thrown the gauntlet down. So, I wore, one at a time, of course, on any given day. I made sure to alternate the hats, so I didn’t wear one down while the other one remained pristine. Fast forward to this one night. The Tween, still in middle school, closing her bedroom door when she came home, her privacy at a premium, would sometimes, only just sometimes, walk Rocky with me at night, if I asked that is, never ever voluntarily. It was chilly, and as we were leaving the apartment, I handed her one of these hats, which she put on, without looking at it. I had Rocky in tow, she was telling me about her day, occasionally pausing to get my feedback, Rocky leading the way. I had on the “Best” hat, she had on the “Friends” hat. As we were approaching a gaggle of Tweens, she muttered, “Ugh. Those girls are not nice,” I said, like a DUMMY, “Well, it’s a good thing we have 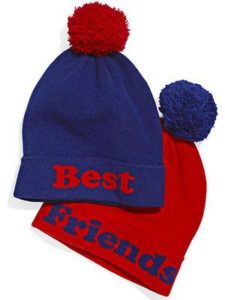 our armor on,” and she looked up at my head and her eyes widened and maybe, just maybe, she threw up in her mouth. “MOM.” She ripped her hat off her head, and as this gaggle of Tweens walked by us, I was double over in laughter. I legit could not catch my breath, I was laughing that hard, just the expression of horror and disgust on her face as she realized we were walking around the Upper West Side with our Best Friends hats on.

It was the best.

We still laugh about it.

Yesterday, I asked The Teenager to walk on the beach with me and Rocky. We’re back at the beach for a few days, this will be our one family vacation this year, and this is where I want to be, the beach. It was golden hour, just an hour before sunset, when the sun begins its setting, when the sun is glowing, when the light is just brilliant. I suspect The Teenager was up for the walk because it would also allow for a golden hour set of photos. I grabbed Rocky, my hat, and turned see if The Teenager was ready.

“MOM. Your hat.” My hat is a denim bucket hat, and I wear it religiously at the beach. The Teenager was laughing and it was then that I realized that The Teenager was also wearing a bucket hat, one her friend Mar had given her, a grey and yellow number from their school.

It’s a miracle we have stopped laughing. 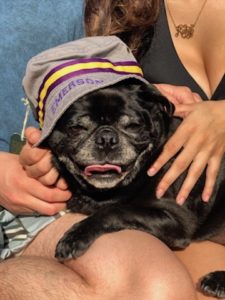 Judge Judith Sheinlin:  “For so many years, there was no consequence for bad behavior. Now: You lose your job! And hundreds of millions of dollars! And you can’t make money for a while, and you can’t get a gig at a club. And we don’t care who you are. Nobody is indispensable.”

Glennda Testone: “Your expectations are all wrong. But your life is going to be great in ways you have no idea. Why waste time?”

Lizzo at the BET Awards.

And now have a laugh with Amber Ruffin.