On the 50th anniversary of the Stonewall Riots, I watched thousands of human beings celebrate, with Pride, with my 79 year old mother in tow. I am admitting up top that I lost patience with her several times. Now, onto the most joyful afternoon. To be standing, bodies deep, along Fifth Avenue for the Southbound procession as well as Seventh Avenue for the Northbound procession, watching women and men of all ages, of the complete spectrum, not simply just the LGBTQIA community, but women like my mother, a straight off-the-boat Baby Boomer, who had her first child (me) at age 24, who raised her children in deep Queens, without internet and with little exposure to anyone outside her immediate world, filled me with emotion, tears constantly pooling up, knowing, knowing, knowing how thorough this journey has been, to simply watch this parade, of this parade being even possible, of the people around me feeling FREE. Free, free to be who they are. So free. As we walked towards Fifth and 20th, we could here the glory of the parade blocks away, the swell of happy-crowd, cheering. We made our way through the throng—the avenues where the parade was were packed, politely so. We were all there to celebrate. And people came ready to party. My Mom and I moved through the throng until we found a spot on 19th and Fifth where we could see without obstruction, and we stayed there for about two hours. I made my Mom leave our spot, and we headed West, walking along Sixth Avenue which was cordoned off for the spillover revelers, and onto Seventh Avenue, where the Parade was moving North! It was even more crowded on the Seventh Avenue side, but it’s possible it was because it was later in the afternoon. We stopped by Grey Dog on West 16th to get lunch, and then headed up to 23th Streeth for more viewing. And by then, it was late, my Mom was tired, so we reluctantly headed home, to watch what we could from the couch. It was touching to watch my Mother observe, in awe. For her first, and hopefully not last, Pride Parade, I’m so happy I got to share it with her. 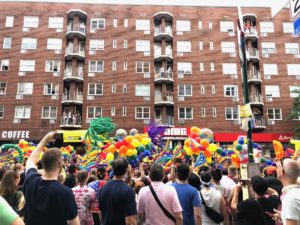 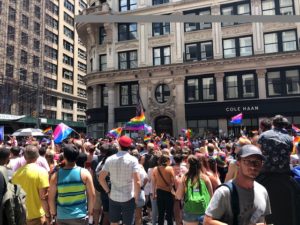 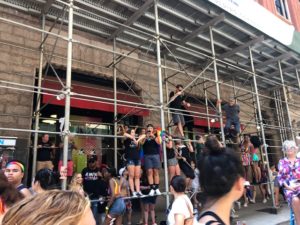 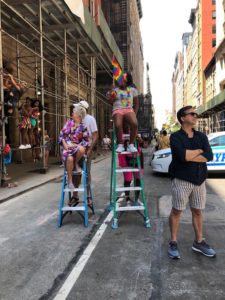 Patrisse Cullors: “I’ve seen a lot of shows that have BLM as part of the storyline, and I can tell when they have probably only talked to someone who is a black person and might be conscious but not necessarily in the throes of the work.”

Lulu Wang: “It’s a real privilege to be able to say no.”

Why these colors for the Pride flag?

The women of art history, they’re just having fun!

So what about popcorn?

Now have a laugh with Sam Jay.