I was whining about my then-job status with a friend of mine, also in her 50’s. As if she were Cher in Moonstruck, slapping Nicholas Cage across the face while yelling, “Snap Out Of It”, she stopped me.

“Marcelle, you need to suck it up. Stay at this job. No one, and I mean no one, is going to hire you.”

“Why not? I have so much experience and I’m a great manager and….”

“No, no one cares. No one is interested in hiring a woman in her 50s in this industry.”

I was angry, listening to her. Angry at her for suggesting, no, not suggesting, straight up telling me that I didn’t stand a chance in the working world, as a woman in her 50s. I clammed up, went back to eating my kale salad, changed the subject to the topic of our kids–always a lifesaver, asking someone to talk about their child–but inside, I was fuming. How could she tell me that I was too old, my value not worthy, that I was no longer cool?

My ego was bruised. I put my blinders on. I went to work, full of hubris. And soon, I found myself unemployed. Unemployed for seven long and stressful months. I contacted everyone I knew in my industry. Old colleagues with grand success. Former employees on the come-up. I was set up with courtesy calls–you know, someone that works at a company introduces you to the hiring manager at that person’s company, and out of courtesy, the hiring manager deigns to speak with you, all the while with one finger on a keyboard and one eye on the clock on a desk. I met with General Managers of companies who I’d known as underlings. I met with strangers who wanted to meet me because of BUST. I met with people who picked my brain about what employment options were available to people our age. I met and I met and I met, hopeful each and every time that I would be hired by someone. That I could provide for my family. That I could have health insurance again. That I could prove my lunch date wrong. That despite my age, I was a valuable member of professional society.

And with each NO, the words of that lunch date trilled before my eyes.

In listening to Madonna’s Billboard speech, I was reminded of the sting of the rejection and humiliation I’ve felt and have been feeling, as a woman in her fifties in trying to be a part of the status quo, trying to not fading away, fighting to not be blown off. I am a woman with so much to do. So much to offer. And there is not one fiber in my being ready to give up, to not be a person who can contribute and just as importantly, earn. As Madonna says, “But I’m still standing.” I am. And, to paraphrase what she also says, the most controversial thing I will do is to stick around. 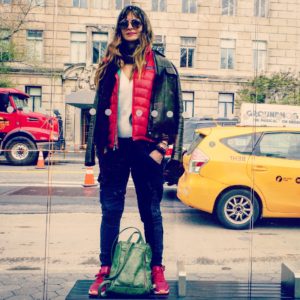 Lily Tomlin: “I believe feminism is a fulfillment of some humanistic impulse that all humans are equal and should be allowed their due, whatever race, whatever religion, whatever gender. I totally identify as a feminist. What else could I identify as?”

I’m so excited for West Side Story and I am not a musical theatre fan.

And now have a laugh with Nikki Glaser.