If you were a radio-listening, MTV-watching girl in the 80’s, you know how massive a band the Go-Go’s were at that time. You could not walk into a book store, or ride an elevator, or be in your car without hearing “Our Lips Are Sealed,” “We Got The Beat,” or “Vacation.” And at that time, MTV played music videos all day and all night and the Go-Go’s were on constant rotation, familiar fixtures. Kathy Valentine is one of the five Go-Gos, just twenty-one when she became the bassist in what would become one of the biggest bands of the decade. Their first album Beauty and the Beat went to Number One on the charts in 1981, cementing their place in rock and roll history as the first all female band to do so. The Go-Go’s weren’t a concept band formed together by some patriarchal puppet master; Kathy Valentine and her bandmates met in the coveted circle that was the late 70’s LA music scene, already in bands of their own, musicians on the rise. And oh how the Go-Go’s rose, for so much of those early 80’s. In her memoir, All I Ever Wanted, now out and available for you to purchase, Kathy documents her road to rock and roll, from her childhood in Texas to the top of the charts. Yes, there are drugs and sex and rock and roll, but there is also humanity, there is the search for self, there is love. I had the opportunity to speak to Kathy, just soon after self-isolation took hold of our now lives. 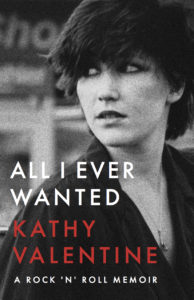 MARCELLE: To this day, anytime I hear the opening riffs of “We Got The Beat,” I start doing that hand-snap shuffle that Belinda Carlisle, your bandmate, perfected.

KATHY: That makes me so happy. I’ve had so many people say, “Oh, this song got me through a rough time.” I’ve had that my whole life, I mean since being a known musician. To have your life and your words and your writing connect with people? It’s just really wonderful. It helps take the edge off of being scared and putting myself out there which I’ve never really done. And I love these stories. I’m amazed how the songs hold up. How we can be sixty years old and still play them. We can still hear them on the radio. There are some songs from the eighties that sound so eighties! The Go-Go’s sound very classic. I’m very grateful for the sound of our records and the quality of those songs.

MARCELLE: Of all the Go-Go’s lyrics, why did you call your book, “All I Ever Wanted”?

MARCELLE: I found your mom to be a hero in “All I Ever Wanted,” because even though she’s full of flaws, she loved you so fiercely while trying to juggle being a woman and being a mother.

KATHY: God, I really liked that you said that and I’m going to pass it on to her. I wanted to be honest, I wanted to be truthful. And I was very conscious of it. I didn’t want my Mom to be the villain. My mom is a narcissist; she wants to be up in the front seat with me. During the time I was writing the book, I would say mom “I’m going to write about you having an affair.” And she would say, “Write your story.” What it reminded me of was that despite all of her failings, she always supported me. That to me kind of summed up what she did right— she didn’t do a lot right but whatever she did, I did come out in the end with some resiliency and some strength. I have to say, I felt supported. I like hearing you say that.

MARCELLE: I felt for your Mom, here she is, a single mom, trying to find her foothold in the world. So what, her boyfriend was a heroin addict? She was just trying to survive, and I relate to that.

KATHY: Absolutely. Your nature is going to play a part in how you parent and my Mom’s nature was very much—she’s very much in the moment. She doesn’t think about consequences. She doesn’t seem to have the ability to weigh out how the actions of now are going to lead or not lead somewhere in the future. That was her, that still is her to this day. It informed how I did everything and also why I clung to everything.

MARCELLE: You do capture the complicated nature of the Mother-Daughter dynamic.

KATHY: There’s always going to be this Mother and Daughter dynamic, that so many women understand. My entire adult life has been different levels of anger and resentment. In my sobriety and my therapy, I realized that I had a difficult childhood. But, I feel like my heart is opening to my Mom in a way that it hasn’t in a while. I’m always going to take care of her.

MARCELLE: Your memoir covers a very specific time frame, from your childhood through being in the Go-Go’s. Why did you choose to include just that window of time?

KATHY: To me, a memoir is a slice of life. It is not an autobiography, which is an entire life. Part of my message is that we can start new chapters as women that are entering a new phase of life. Our kids are moving on to live their lives. I’m sixty-one, it’s a different world but yet it’s a  very new and exciting world for me. It’s a new chapter. As I started outlining year by year, it all seemed to work together really well. The time frame was two very vivid decades for a lot of us. It’s one music city in the seventies—Austin—and another music city in the eighties—Los Angeles. I just really liked the way it all fit together. And, mainly I am just really grateful that I didn’t hurt anybody or cause any terrible accidents or go to jail. I think I was the only damage that I did.

MARCELLE: You were already a notable musician when you became a Go-Go. Do you still consider yourself a musician?

KATHY: I am a life long musician. I can’t see not playing in a band unless I’m physically unable to.

And listen to her audiobook, and get ALL I EVER WANTED!

go-go's, kathy valentine, our lips are sealed, we got the beat